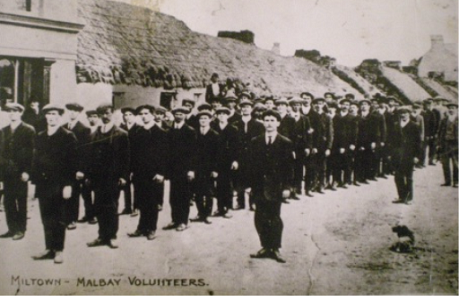 Group of Irish Volunteers training at Milltown Malbay West Clare circa 1913. Irish nationalists and republicans were quick to note and imitate the actions of the Ulster Volunteer Force formed in opposition to Home Rule In response to the article ‘The North Began’ by Eoin Mc Neill in the Gaelic Leagues newspaper An Claidheamh Solas, a public meeting was held at the Rotunda in Dublin on November 25th 1913 to establish the Irish Volunteers. Three thousand men enrolled in the new force that night and a number of women who were refused admission to the meeting later founded Cumann Na mBann. 75,000 men had enlisted in the Irish Volunteers by May of 1914.

The organisers of the “Howth Gun-running” Rodger Casement, Lord Ashborne and Mary Spring Rice. Although 75,000 men had enlisted in the Irish Volunteers by May of 1914 the force was critically short of arms –as long as they remained unarmed the Irish Volunteers were treated as little more than a farce by the British Authorithies. In 1914 Casement raised £1,500 amongst sympathisers in London for the purchase arms for the Irish Volunteers. This money, used to finance the Howth Gunrunning, was donated by Alice Stopford Greene, Erskine Childers, Mary Spring-Rice, Connor and Hugh O Brien, Lord Ashbourne, Lady Young, and Minnie Ryan. All the subscribers to the fund with the exception of Ryan were Protestants of Anglo-Irish stock.

Unloading guns from the Asguard at Howth on the morning of the Howth Gun-running, 26th July 1914.. Mary Spring Rice (foreground ) and Erskine Childers ( far right). The Asgard was laden with 900 Mauser Rifles that had been purchased in Germany using the £1,500 raised by Rodger Casement.  The arms were landed at Howth by the I.R.B., the Irish Volunteers and Na Fianna the remaining 600 rifles in the shipment were landed at Kilcoole, County Wicklow. The guns from the Asgard were unloaded within an hour and were transported back to Dublin by taxi, bicycle and on the shoulders of the Volunteers that had marched from Dublin that morning. The rifles and ammunition landed at Howth formed a significant part of the rebel armament used in the 1916 Rising. 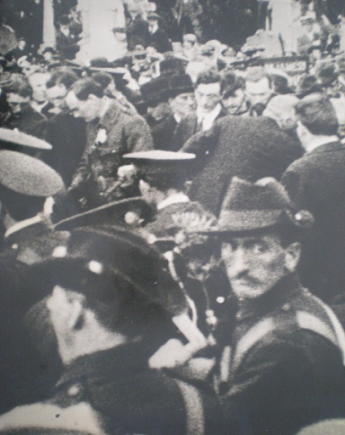 Patrick Henry Pearse giving the funeral oration for the Fenian chief Jeremiah O’ Donnovan Rossa (1831-1915). O Donnovan Rossa a native of West Cork had experienced the horrors of the Great Irish Famine in his youth. He was imprisioned for his Fenian activities from 1865-1871 and after his release went to America where he started a ‘skirmishing fund’ to finance militant republican activities. After his death in New York in 1915 his body was returned to Ireland for burial at Glasnevin cemetary Dublin.  His funeral served as a rallying point for the I.R.B., Irish Volunteers, Citizen Army and the other militant republican groups involved.

Patrick Henry Pearse, Director of Operations for the Irish Volunteers addressing a public meeting at Dolphins Barn Dublin August 30th 1915. A fiery orator and skilled writer – Pearse was radicalised by the Home Rule crisis and eventually joined the I.R.B.’s Military Council, which plotted the 1916 Rising, and was elected President of the Republican Provisional Government. Pearse was executed by the British Army at Kilmainham Jail on the 3rd May 1916. 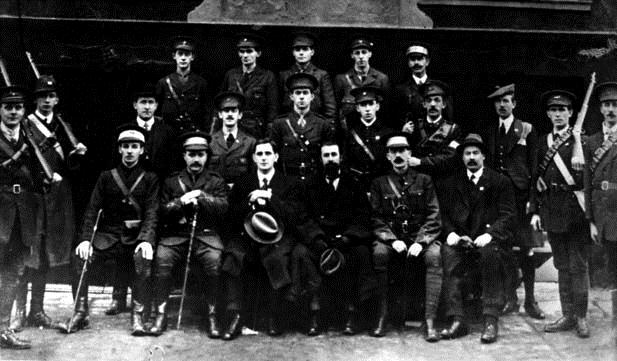 Captain Robert Montieth in the uniform of Casements Irish Brigade. The Brigade was recruited by Rodger Casement in 1915 & 1916 from members of Irish regiments of the British Army held in German P.O.W. camps. Its purpose was to support a proposed German invasion of Ireland to coincide with the 1916 Rising. Montieth a Protestant Republican from Wicklow joined the British army aged 16 years and fought in the Boer War. The British conduct of that war led to Montieth’s complete disillusionment and he eventually left the British Army. After returning to Ireland he secured employment with the Ordinance Survey.  In 1913 Montieth joined the Irish Volunteers. As a result of this he was dismissed from his job and the British authorities issued an excluding order barring him from Dublin. In September 1915 he travelled to Germany where he attempted to help Casement recruit an Irish Brigade. Failing in this they returned to Ireland on board U-Boat 19 a German submarine. They were put ashore in a collapsible boat and landed at Banna Strand, Kerry on Good Friday 1916. Casement was arrested by the R.I.C. shortly afterwards. Monteith made contact with the Irish Volunteers and remained in hiding until he escaped to America following the Rising. He later published his memoirs in a book entitled “Casement’s Last Adventure.”

Lieutenant Michael Malone who commanded the Republican garrison at 25 Northumberland Road during the Battle of  Mount Street Bridge. Malone was killed in the fighting along with Patrick Doyle, Richard Murphy, George Reynolds and Patrick Whelan. The Battle of Mount Street Bridge saw the heaviest casualties inflicted on the British during the rising. A handful of Irish Volunteers stationed at 25 Northumberland Road and  Clanwilliam House killed 4 British officers, wounded 14 others, and killed or wounded 216 British soldiers before they were forced to retreat.

Funeral of Thomas Ashe who had commanded the republican forces in north Dublin during the Rising and was well known amongst republicans for his capture of Ashbourne R.I.C. barracks during ‘The Battle of Ashbourne’. Ashe was sentenced to two years hard labour in August 1917 for making a seditious speech and was imprisoned at Mountjoy Prison in Dublin. On the 20th September 1917 thirty eight republican prisoners at Mountjoy Prison, led by Ashe, began a hunger strike demanding to be treated as prisoners of war. Ashe died of heart failure and congestion of the lungs on the fifth day of the hunger strike after being force fed. Michael Collins delivered Ashe’s funeral oration. He spoke briefly in Irish before adding; “Nothing additional remains to be said. That volley which we have just heard is the only speech which is proper to make over the grave of a dead Fenian.” 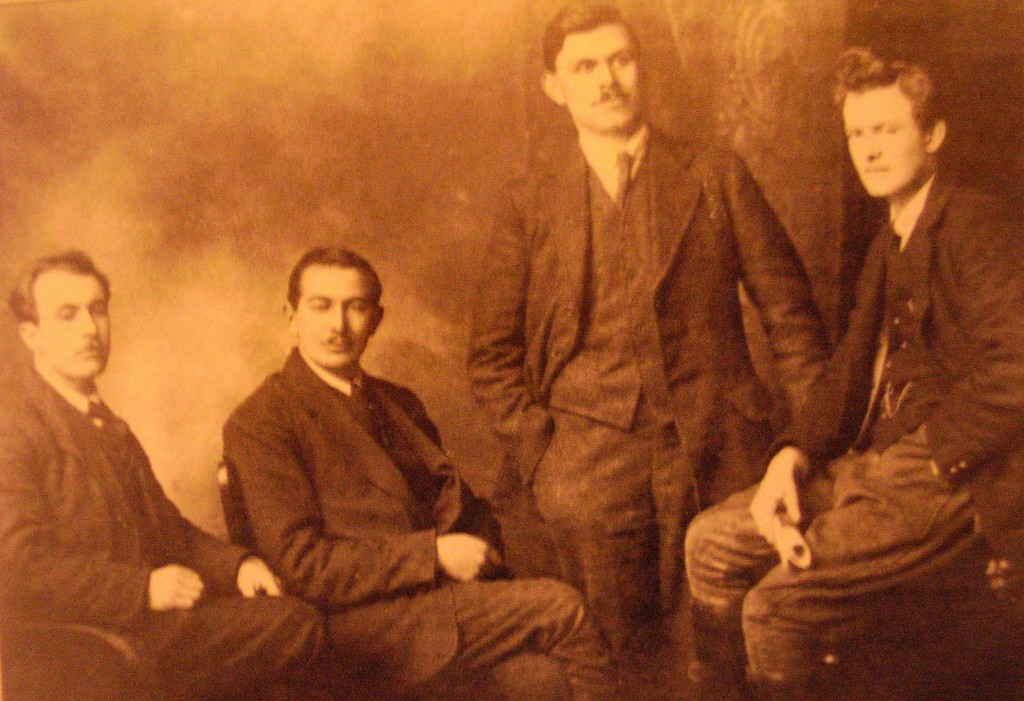 Seamus Robinson, Sean Treacy, Dan Breen and Michael Brennan. Robinson, Treacy, Breen and six other members of the 3rd Tipperary Brigade set up an ambush to capture a consignment of explosives being transported to a quarry at Soloheadbeg. The republicans had waited in ambush for five days when the consignment of explosives escorted of two armed R.I.C. men arrived at the quarry on the 21st of January – the same day that Dáil Éireann held its first meeting. When they reached the gates of the quarry the two R.I.C. Constables, James Mc Donnell and Patrick O Connell, were called upon to surrender. The pair reacted by reaching for their rifles and were shot dead by the republicans. The Soloheadbeg Ambush is seen today as the first action of the Irish War of Independence. Brennan was leader of the I.R.A.’s East Clare Brigade’s flying Column during the War of Independence and later became leader of the Irish Army.

Lieutenant Martin Savage from Ballisodare, County Sligo. On 19th December 1919 the I.R.A. attempted to assassinate Field Marshall Sir John French the Lord Lieutenant of Ireland. Eight members of ‘The Squad’ accompanied by Dan Breen, Sean Treacy, Seamus Robinson and Sean Hogan attacked French’s motorcade at Ashtown Cross, Dublin as he returned to his residence in the Pheonix Park. One member of French’s escort and Martin Savage (pictured) were killed during the attack.  Sir John French who was travelling in the first car had a narrow escape – the I.R.A. had concentrated their fire on the second vehicle in the motorcade in the mistaken belief that French was travelling inside it.

Terrance Mc Swiney (standing second from right) with a group of Irish Volunteer officers at a training camp. Terence Mac Swiney the Mayor of Cork died in Brixton Prison, London on the 25th October 1920 after 74 days on hunger strike. Mac Swiney’s death made newspaper headlines around the world and brought increasing international political pressure on the British Government to reach a political settlement with the Irish Republicans.

Tom Barry Commander of the 3rd West Cork Brigade Flying Column. On the 28th of November 1920 Barry led an I.R.A. Flying Column that ambushed a patrol of eighteen R.I.C. Auxiliaries at Kilmichael, County Cork. Sixteen of the Auxiliaries and three I.R.A. Volunteers were killed in the ambush. One of the Auxiliaries escaped but was captured and killed shortly afterwards. Only one of the Auxiliaries Cadet H.F. Forde survived the ambush but was left permanently debilitated by his wounds. The I.R.A.’s success at Kilmichael was a serious blow to the British. Lloyd George the British Prime Minister observed: “The last attack of the rebels seemed …to partake of a different character from the proceeding operations. The others were assassinations. This last was a military operation.” 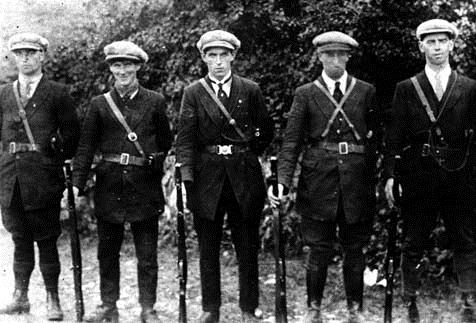 I.R.A. Volunteers Paddy Dunne, Patrick Quinn, Michael O’ Hanrahan, P. Nixon and an unidentified fifth member of the Kilkenny Brigade photographed shortly after the Coolbawn Ambush. On the 18th June 1921 British soldiers surprised an I.R.A. unit that had preparing an ambush position for a British military convoy expected to travel between Castlecomer and Athy. Two members of the I.R.A., John Hartley and Nicholas Mullins, were killed in the fighting that followed.

Easter April 1922. Veterans of the 1916 Rising commemorate the Rising’s 6th anniversary by marching through the city. The men marching behind the banner are members of E. Company 4th Battalion of the I.R.A.’s Dublin Brigade. Most members of this unit had attended Saint Enda’s  Patrick Pearse’s school at Rathfarnham.