Anne Devlin Commemoration will be held on Sunday 23 September. There will be a memorial mass at 11.30am in St. Nicholas of Myra Church in Francis Street, Dublin 8, where her daugher got married in 1845. (The mass is usually in St. Catherine’s of Meath Street, where Anne herself was married in 1811, but that is closed due to fire damage). Afterwards (c.100pm – depending on traffic – it’s All Ireland Football Final day) some of us will go to Glasnevin to lay a wreath on her grave. This will be the seventh year this commemoration has been held, and it is 161 years since her death from starvation on September 18, 1851.

The illustration on the poster is the new mural don by Maser during the recent Liberties Festival to commemorate Anne, and is on a wall just down from the church in Carman’s hall. 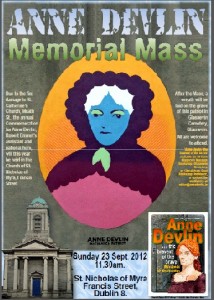