Anzac Defender of Trinity College Dublin 1916
Your readers may be further interested in the story of one of the five New Zealand soldiers who assisted in the defence of Trinity College Dublin during the 1916 Irish Rebellion. Private Edward Waring could be considered a ‘fair dinkum Anzac’, having been born in Australia, raised in New Zealand, then wounded on Gallipoli.
Waring was born in Melbourne in 1892 prior to his family immigrating to New Zealand to settle at Aratapu, Northland. When war came in August 1914, Waring was a territorial soldier and keen for overseas service with the New Zealand Expeditionary Force (NZEF). At the time of his enlistment in October 1914, he was working in Auckland as a blacksmith. His attestation papers confirm he was 5ft 7 inches tall, of fair complexion, with blue eyes, and brown hair. He gave his religion as Methodist.

The above photograph shows Waring (kneeling second from the right) with his tent mates during military training in New Zealand. In December 1914 Waring embarked from Wellington with the Auckland Infantry Battalion for Egypt where the NZEF and Australian Imperial Forces were gathering for the war against Turkey. After further training the Auckland Battalion embarked from Alexandra on 12 April 1915 to take part in the Allied landings in the Dardanelles.
The Aucklanders went ashore at Anzac Cove late on the morning of 25 April. Waring survived eight days on the Gallipoli Peninsula until he was wounded in the left thigh by a Turkish bullet on 3 May. He was initially posted as missing but was eventually evacuated off Gallipoli to a hospital ship bound for the United Kingdom.
Edward Waring’s wounding on Gallipoli was reported in The Auckland Weekly News with a photograph of him. 2

By August 1915 Waring was convalescing at the New Zealand War Contingent Hospital in Walton-on-Thames, England. He was discharged from hospital in February 1916 and attached to the New Zealand Base Camp at Hornchurch. It was from Hornchurch that Waring decided to spend his Easter leave in Dublin.
The Irish Rebellion commenced on Easter Monday, 25 April, with Irish Nationalists occupying key buildings in the centre of the city. By that evening 14 Dominion soldiers had reported for duty at Trinity College after allegedly being shot at on the streets by armed insurgents. The South African, Canadian and Anzac soldiers were issued with rifles from the Officer Training Corps armoury, and together with OTC cadets, took up defensive positions in the university buildings. An Anzac sharpshooting squad was formed from the five New Zealanders and one Australian soldier present, Private Michael McHugh.
During Easter week the Anzacs took ‘pot shots’ at rebel positions and harried movement with well-directed rifle fire from the university roofs. It is claimed that accurate shooting from the university disrupted the transfer of cable messages across Sackville Street from the rebel-held General Post Office. It was unfortunate that on the first commemoration of Anzac Day, 26 April 1916, the Anzacs shot dead a young Irish Volunteer as he cycled past the university. Later that week the Anzacs assisted British forces in ‘mopping up’ rebel positions near the university. 3 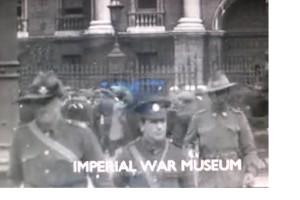 The above newsreel single-frame shows Privates Waring (left) and McHugh (right) in slouch hats walking from Trinity College after the surrender of the Irish Nationalists. The complete footage can be viewed on the Imperial War Museum website.
After the surrender, the six Anzacs rejoined their units in England. Each eventually received a small silver cup to commemorate their involvement in the defence. Similar cups had been presented to university staff, OTC cadets and the other soldiers who assisted.
In July 1916, Waring was sent to the New Zealand Military Camp at Codford and appointed a company cook. He did not see further active service with the NZEF probably due to his war wound. He remained at Codford before being struck off unit strength in October 1917.
In November 1917 Waring was shipped home aboard the New Zealand troopship Makoia and discharged in Auckland as being ‘no longer physically fit for war service on account to wounds received in action’. He had served 3 years and 21 days overseas.
In late 1918 he fell victim to the ‘Spanish Flu’ pandemic, and his military file states he died of influenza and pneumonia at Papakura Temporary Hospital on 25 November, aged 26.
Today, Edward Waring lies beside his parents William and Anne Waring in the Methodist section of Auckland’s Papakura Cemetery. Interestingly, his headstone bears no reference to his First World War service which is unusual as most returned servicemen were eligible for a military headstone or plaque. One wonders if his parents in their grief chose just a simple civilian headstone. 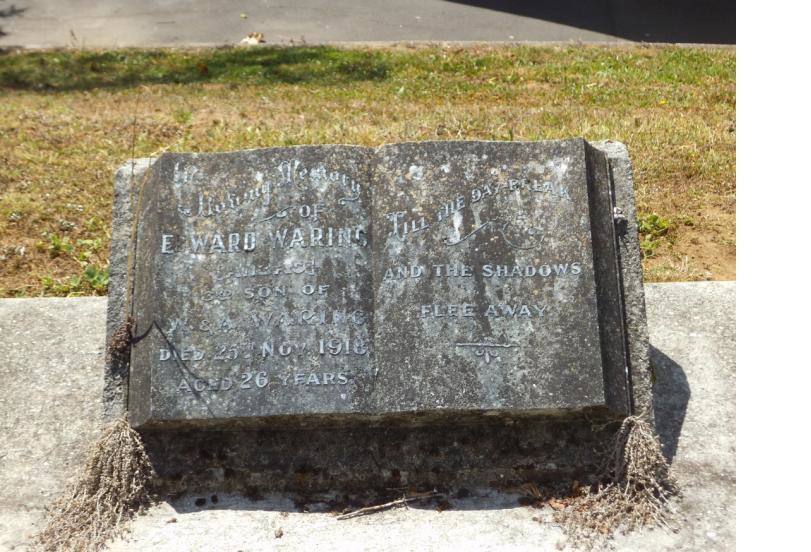 There is an intriguing postscript to Waring’s story. In 1966 on the 50th anniversary of the Easter Rising, Waring’s nephew wrote to the New Zealand Ministry of Defence seeking confirmation on family stories of his uncle’s involvement. The Ministry was however, unable to confirm from his military file whether Waring had been in Ireland, because he was on leave, and therefore his involvement was not officially recorded as active service with the NZEF