Home/Emblems of The Irish Volunteers/Artefacts from the General Post Office, 1916
Previous Next

Letter from T. Martin, 12 Trinity Street, Dublin, to Fr. Aloysius Travers OFM Cap., enclosing an Irish Volunteer button. One is in brass with a harp decoration. Also enclosed is a uniform badge: I.V. (Irish Volunteers) with green enamel inlay, initials and central harp, the reverse stamped ‘P. Quinn & Co., Belfast’. The letter informed Fr. Aloysius that ‘in searching among the ruins of GPO I found the enclosed. I thought it might interest you and took the liberty of sending it to you’ 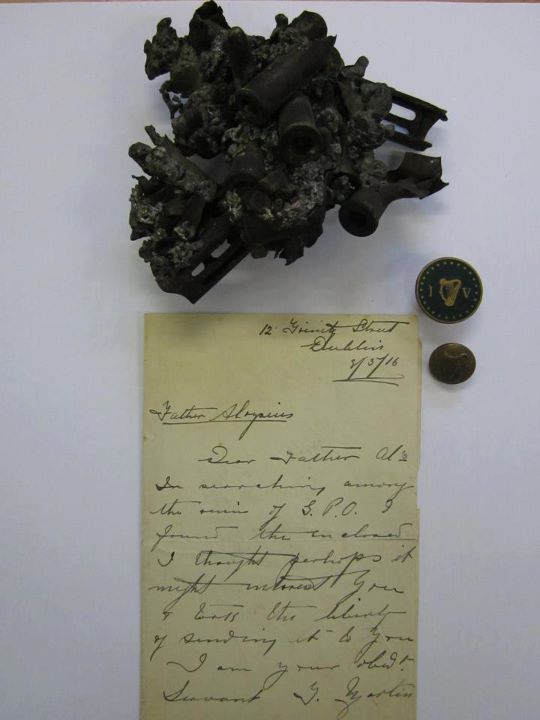 This hand gun was found in the gallery of St. Mary of the Angels, Church Street Dublin after the 1916 Easter Rising.

A ‘Savage Model 1907’ Pistol reputed to have been used by an Irish Volunteer during the 1916 Rising. The weapon was found by a Capuchin Friar on North King Street after the conclusion of the hostilities. With leather holster and spare bullet cartridge. A manuscript note found with the pistol in the gallery of St. Mary of the Angels, Church Street, reads:

‘These are souvenirs of the 1916 Rising’. A revolver used in King Street. A scissors used in the Four Courts’. Fr. Col

[umbus Murphy]’.
Firearm: This semi-automatic pistol was produced by the Savage Arms Company of Utica, New York, from 1907-1920. It had a 10 round magazine. A safety leaver is located on the left side of the pistol, at the upper rear of the grip.

The Model 1907 is often erroneously called a Model 1905 because of the date Nov. 21, 1905 stamped into the top of the slide on all Savage pistols. This was the date Elbert Searle was awarded one of his firearm patents, which became the design basis for all Savage pistols. The model 1907 uses no screws (even the grips snap into place) and is relatively easy to dismantle.

Note: Both the pistol and the holster are worn. The firearm has been deactivated. 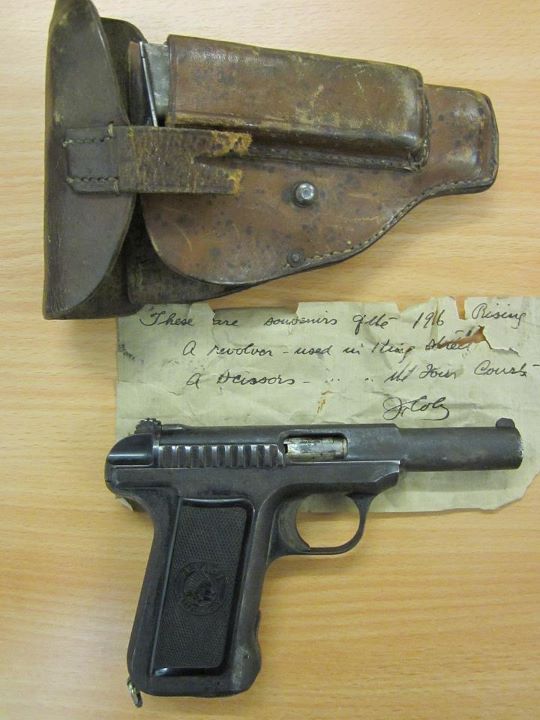