On 9 May 2021, the 100th Anniversary of the death of Captain Frank Hurley, 3rd West Cork Brigade will be remembered by his descendants in Ireland, USA and Australia. They honour and remember him for giving his life for freedom in Ireland.

On 9 May 1921 while in custody of the Essex Regiment he met his death, making a gallant bid to escape into the woods at Castle Mahon/ Bernard, Bandon, Co Cork, Ireland. An account of his death is mentioned in “Towards Ireland Free- The West Cork Brigade in the War of Independence 1917-1921’ by Liam Deasy and other books on Ireland’s War of Independence, including ‘Guerilla Days in Ireland’ by Tom Barry.

John Francis (Frank) Hurley, lived at Laragh, outside Bandon, with his parents on a small farm. He was the youngest of 11 children to Daniel Hurley and Julia Lynch. He was born in 1891, some 25 years after the eldest, Mary, my grandmother was born. Mary came to Australia when 171/2 years old, following Timothy Mahony, my grandfather from Murragh, near Bandon. Timothy was a labourer and may have been working on the Hurley farm. They married in 1888 in Brisbane, Australia.

Frank and some of his siblings, never met their sister Mary, being born after she immigrated.  Mary died in 1957 and many years’ later, letters from Frank were found behind a framed picture from Mary’s possessions. I suspect this Irish lady was all too careful about the contents of his letters, considering her brother was active in the IRA fighting British Forces known as the Black and Tans. Australia was a country founded by the British which at that time still held close military ties with England.

Mary wrote on an envelope in which she kept the letters, ‘Last letter I had from Frank. Died 9th May 1921” She then wrote “Far dearer the grave or the prison illumed by one patriot name than the trophies of all who have risen on liberty’s ruins to fame.”

Although never seeing each other, this quote to me obviously shows her love and support for her brother in his death for the cause in Ireland’s freedom. The words are taken from Augustin Thierry (1795-1856), the French Classical liberal historian, who admired the habit of the conquered Irish to sing about their lost liberties.

The letters from Frank give an insight of his involvement in the Irish War of Independence, and his transportation by Destroyer to Belfast from Cobh, then after a week onto England. They were written from the Wormwood Scrubs Prison in London in 1920, where he spent time, prior to his release and death in 1921. He mentions the actions of the police who disguised at night fire into houses, and who have murdered several. Of his situation he said that ’It is Freedom now or slavery for another generation.’ Further stating, ‘Anyway we are not lonely here for we have the best men in Ireland here.’  Mention of a hunger strike was also made.

Frank organised that his letters to his sister Mary in Australia would be smuggled out of the prison by ‘Maggie’.  It is assumed that this is his sister Margaret. Another sister Anna was the leader of the Cumann na mBan (Irish Republican Women’s Paramilitary) of the Bandon district at that time.

Tom Barry in his book ‘Guerilla Days in Ireland’ wrote, ‘Frank, a veteran Volunteer, Captain of the Laragh Company, was a fine soldier and comrade, and had fought conspicuously with the Brigade Flying Column in many of its engagements.’ He was at Crossbarry with the Mount Pleasant /Farnivane Company.

Flor Begley (Piper of Crossbarry fame), father of Diamuid Begley who wrote the book ‘The Road to Crossbarry’ where his father Flor saw action, was interned in 1920 with Frank Hurley in Wormwood Scrubs, along with ‘over one hundred and sixty men.’  Diarmuid has a quote by Grace Lorenza O’Malley which I think along with Thierry shows the feelings of the time –‘What can ye know of spirits such as these or of the powers that move them to great deeds ‘gainst frightful odds?. What did they do? You say who will not see, Nor judge their merits further than their gains, They gave their lives –no more!’

Your many descendants remember you. 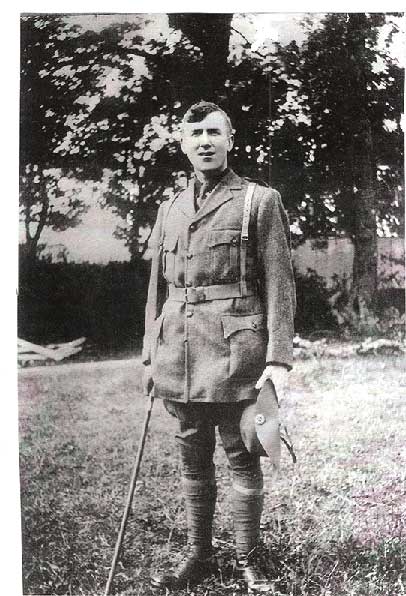 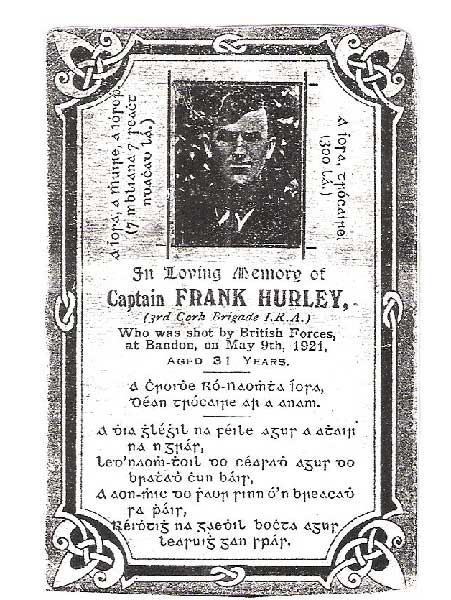 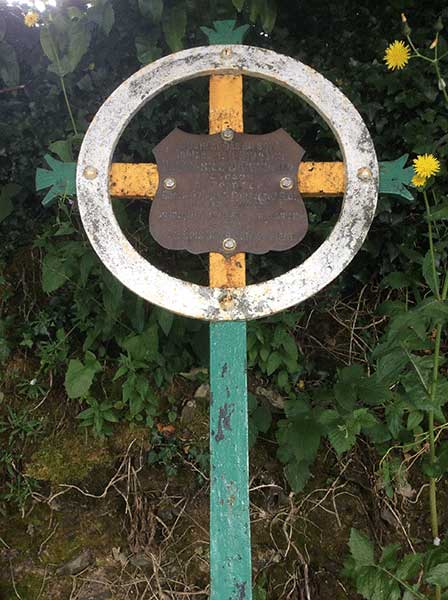 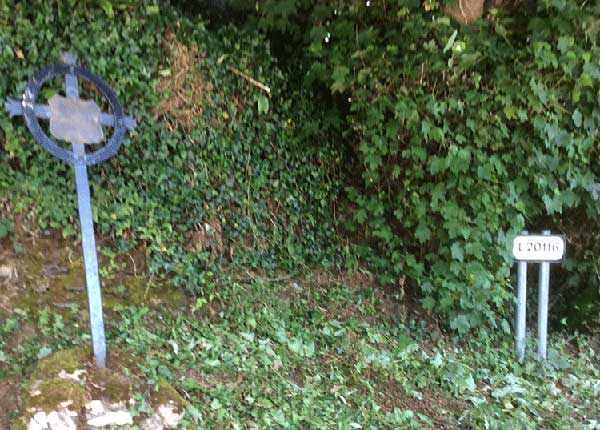 I live in Australia and have Irish and Australian citizenship. I’am a grandson of Mary Hurley who came to Australia from Ireland. Her brother Captain Frank Hurley, 3rd West Cork Brigade, IRA, was shot by the Essex Regiment and killed on 9 May 1921. Before his death in Ireland he was in a London prison from where he wrote to his sister Mary in Australia, who he had never met.

His descendants wish to honour him on the 100th Anniversary of his death on 9 May 2021. Our intention also was to be in Ireland to honour and remember him at the Bandon, Co Cork IRA Memorial to him, but that is not possible now for those in Australia and the USA. 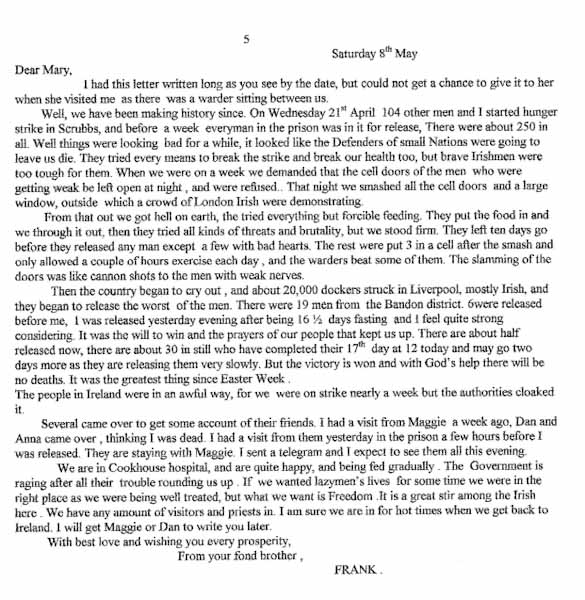 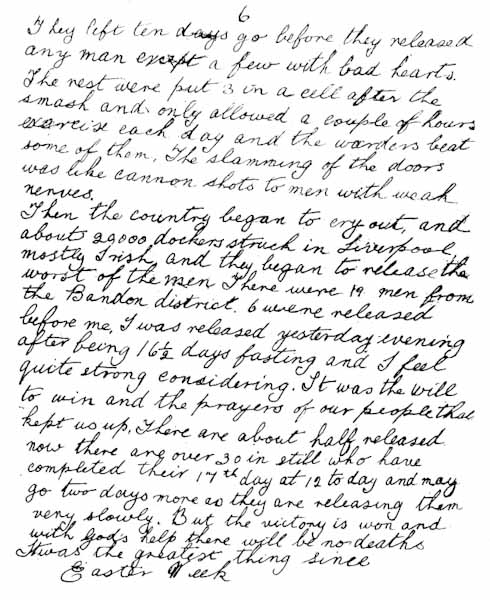 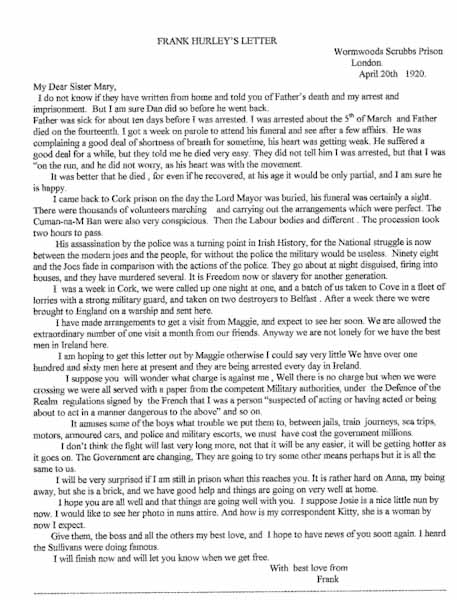 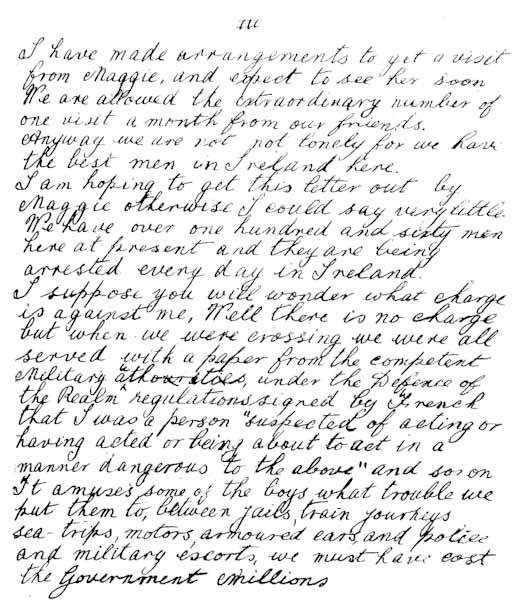 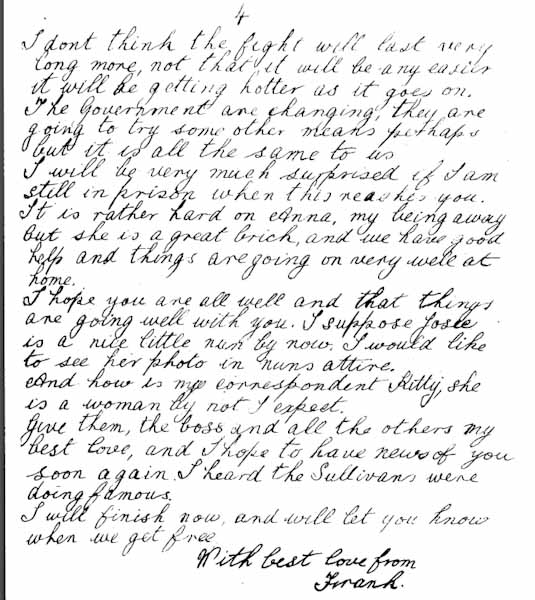 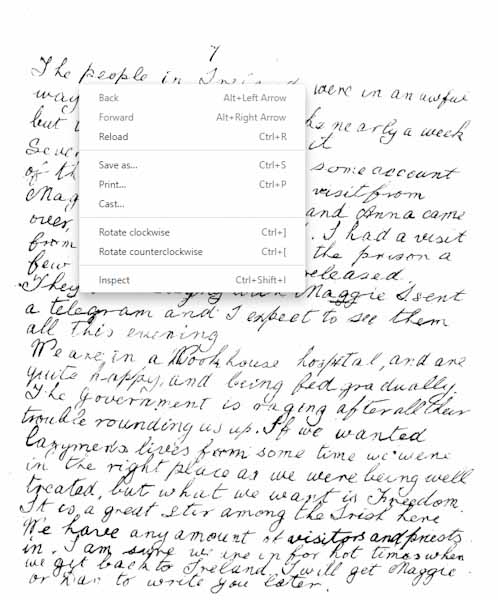 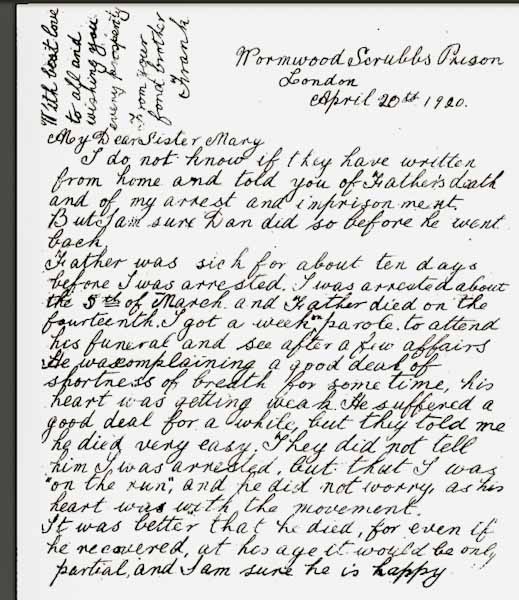 Frank Hurley’s descendants would greatly appreciate any assistance that you can give us in our desire to honour Frank, and to also give your readers a little of his story for Ireland.

I have attached a story on him that you may find appropriate to publish.  I also attach his letters, photos of him and his IRA Memorial. The original letters were given to me by a cousin who inherited them after our grandmother died. 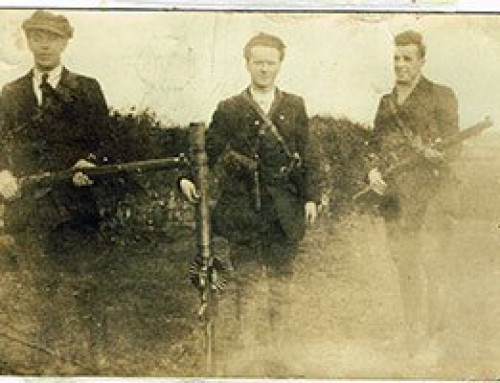