Hurling cost him his life”
Historian Pádraig Óg Ó Ruairc looks at the life and death of Patrick
White who was shot dead by a British Soldier during a hurling match 90
years ago.

What began as a sports match by republican prisoners at Spike Island
Prison, Cork ended in tragedy when Clareman Patrick White was shot
dead by a British soldier 90 years ago during the War of Independence.
White a native of Meelick, County Clare, was a carpenter by trade and
was married with a young family. He played a leading role in the
struggle for Irish Independence between 1916 and 1921 and was a
Captain in the Meelick Company of the I.R.A.’e East Clare Brigade.  He
had been captured by the British Forces, with his neighbour Thomas
Ringrose, in January 1921 and taken to William St. R.I.C. Barracks in
Limerick. After a few days they were transferred to the Ordinance
Barracks, Limerick where they and used as hostages who would be
executed in the event of an I.R.A. attack on the British troops. Years
later Thomas Ringrose clearly remembered the orders of a British
officer to execute the prisoners if they were ambushed: “In the middle
of the night White and I were ordered outside and put into lorries. …
The lorry I was ordered to occupy was manned by an English machine gun
regiment. The lorry Patrick White was put into was occupied by the
hated Auxiliaries. Next morning I found myself occupying a cell in
Ballyvoanare Camp in Cork and White found himself in a police station
in Limerick. I think it was Newcastlewest. From there on we were used
as hostages for the forces going out on the roads night and day. After
months of this we were returned to the ordinance barracks now Mc
Mahon’s timber yard. When I again met White his face bore many scars
handed out to him by the Auxiliaries. I feel I was just lucky being
with the military – they were English with no Scotch amongst them. I
was not bashed about. The commander of the regiment Colonel Hope,
periodically appeared to instruct his soldiers how to act in case of
attack by the Shinners. ‘Immediately get rid of your mascot. Don’t lie
behind cover firing shots. Fix your bayonets. Go after the Shinners
and don’t forget one is never dead until you put the bayonet in him.”
Ringrose met White again when he was transferred to Spike Island
Prison in Cork in May 1921. A few days after their reunion White was
shot dead on the 1st June 1921 while allegedly trying to escape: “On
our unexpected landing on Spike Island, Patrick White came over to me,
shook my hand and said ‘We are now safe, we have got through.’ With
our lives, he meant. We were the only Clare men amongst about five
hundred Cork and Kerry men. Our only comfort at the time was to go for
a walk in the compound, a wired in square outside the huts in which
the Corkmen used to bash a ball about with hurleys. On the particular
day of White’s death I had got the loan of a newspaper, a fortnight
old, on the condition that I would have it back within a quarter of an
hour. I sat on my bed to read and White came over and said ‘What about
our walk.’ I said wait, I have to give this paper back very soon.
White then did something he never did. He looked around the hut and
saw a hurley, picked it up and said ‘I will go out and hurl, come out
after, with the news.’ I said right. A few moments later, I heard a
shot and on looking through the window I saw somebody throw up their
hands and fall back. I dashed out hoping it was not White, but indeed
it was. I held him until he died. The only words he spoke were ‘What
will my poor people do.’ The circumstances were the hurling ball went
near the wire and the players shouted to hit back the ball into play
as he was nearest to it. The sentinel, a Scottish soldier, was
evidently out to have a go and let him have it.”
Republican prisoners, who had taken part in the game with White,
claimed that he had called out to the sentry to return the ball. The
British sentry replied ‘Come here and get it’ and shot White dead when
he followed this order. White was buried at the republican plot in his
native parish.
36 years after his death, in June 1957, a plaque was unveiled at Spike
Island, Cork to mark the spot where Patrick White had been killed.
Sean Moylan T.D., who had lead the I.R.A.’s North Cork Brigade during
the War of Independence, gave the oration at the unveiling. Moylan
payed compliment to the leading role that Patrick White and his fellow
republicans in Clare played in the fight for Irish freedom. “The man
who we honour here today was one of those, associated from his early
years with patriotic endeavor, a pioneer Volunteer, Captain of the
Meelick Company of the East Clare Brigade. Here where his body fell,
we of the Cork Brigade pay our tribute to his memory. His spirit has
gone back to Corca Baiscin, to the Stony Hills of Clare, to become
part of Clare’s tradition. That tradition that ensures that in the
nations need, Clare will stand in her defense as stern as the Cliffs
of Moher, as strong as the Shannon, as enduring as the sea.”
Spike Island remained in use as a prison until recent years and it
was not possible to hold commemorations at the site. Following the
reopening of Spike Island as a heritage site last year members of the
Meelick Ambush Commemoration Committee and the Irish Volunteers Commemorative Organisation decided that a commemoration
should be held at the spot where Patrick White was killed.

On Sunday,
5th June members of the Committee and the Irish Volunteers Commemorative Organisation  travelled to Cork to mark the 90th
anniversary of Whites death. The weather was particularly good and a
group of about 50 people who were visiting the Island also took part
in the ceremonies. At 3p.m. Johnny White laid a wreath at the spot
where Patrick White was killed and a minutes silence was observed. 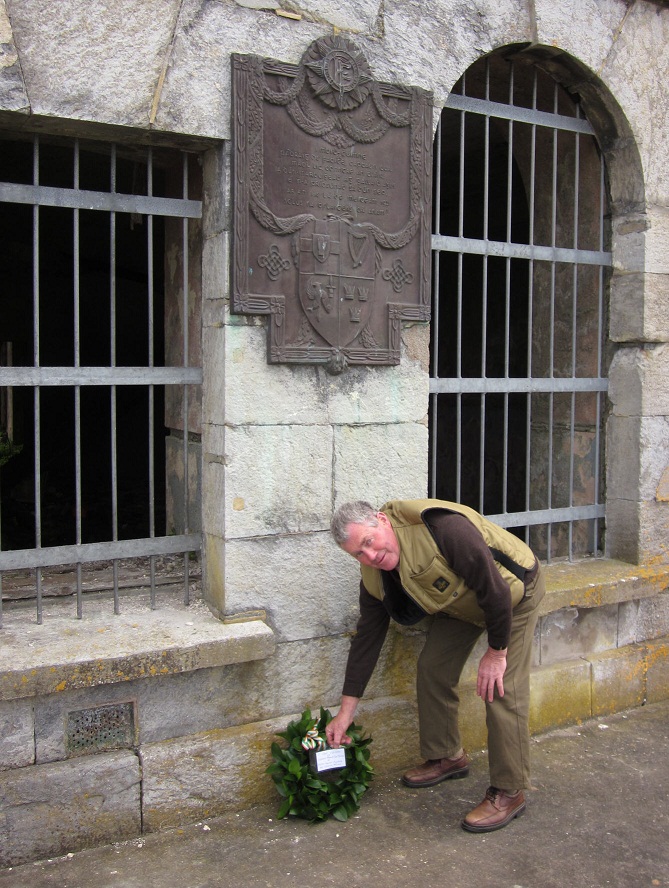 Later this month another commemoration will be held in Meelick,
County Clare for Captains Michael Gleeson and Christopher Mc Carthy
who were killed by the British army in 1921. On Sunday 26th June a
wreath laying ceremony will take place at the republican plot in
Meelick following 12 o’ clock mass. This will be followed at 1.30 p.m.
by the unveiling of a newly commissioned monument marking the spot
where Gleeson and Mc Carthy were killed at Woodcock Hill Road,
Meelick. Further details are available from Johnny White (087 6341039)
or Cathal Crowe (087 1368882)

The Irish Volunteers Commemorative Organisation will be in attendance.