Captain Tadhg Kennifick, Cork No. 1 Brigade IRA, who was killed by the Free State Army on the 8th September 1922, while on the way to his mothers’ funeral. He received a horrific death, under the orders of General Dalton, who had him dragged behind the back of a Free State truck, while his hands were tied together. He was then beaten with rifle butts in the face and on his body, losing several teeth and incurring vicious wounds and was eventually shot twice in the head and his body dumped behind a wall just outside Coachford Village, Co. Cork.

The new monument is a Celtic Cross erected by members of the Tadhg Kennifick commemoration committee. 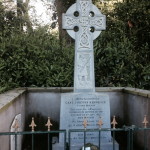 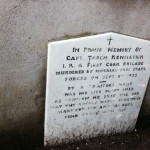 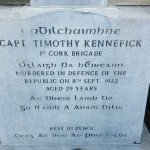