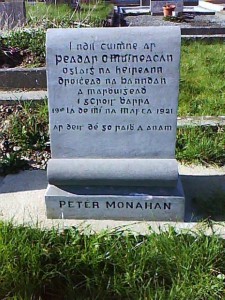 Interesting snippet here Peter Monahan was a Scotsman serving in the British army Who deserted and joined the 3rd West Cork Brigade An explosives expert, who thought the colum to assemble and plant the mines. Up to this many mines failed to explode. There was an element of mistrust at first for obvious reasons He never spoke about his past or where in Scotland he came from. He proved his worth at the Crossbarry, when he threw himself on grenade saving a number of his comrades He was killed instantly. For many years his grave was Irelands only grave or if you like tomb to the Unknown Soldier. In the 1980s his relations came to Bandon and were shown his resting place at the republican plot in cemetry ajoining St Patricks Church After many years he was reunited with his family Alas he was no longer the Unknown Soldier. Tom Barry spoke very highly of this gallant man!