All the text and photographs below have been compiled by Derek Molyneux and his daughter Shannon. Well done to them both, they have and are doing outstanding work in remembering the 1916 Rising. The Irish Volunteers Commemorative Organisation are thankful for their support and we congratulate them on a great work in progress..

“As we approach the centenary of one of the most significant events in our history we are compiling a catalogue of interesting photographs from the era & comparing them with the modern equivalent.”

Townsend Street then & now featuring a Rebel barricade.. The Loop Line railway bridge in the background once again clears up this location as does the red brick building which appears to have changed very little. 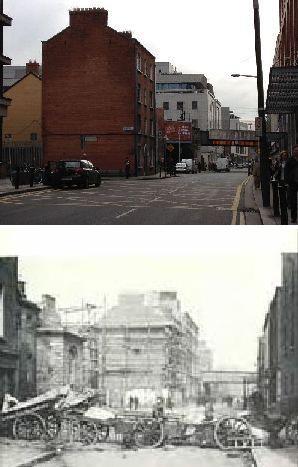 Another improvised Armoured Personnel Carrier pictured on Batchelor’s Walk. The devastation caused by the artillery bombardment on Lower O’Connell St is clearly evident in the background.

The British made use of improvised armoured personnel carriers such as this one pictured in Upper O’Connell St.

These were flatbed trucks which had a number of boilers supplied by Guinness’ Brewery & put in place at The Inchicore Works mounted on their backs which would enable troops to be carried with less exposure to rifle fire. The holes drilled into them were to enable the troops to aim their rifles out. The British used them primarly around the North King St area due to the intensity of the fighting.

The Granville hotel in the backgorund has since been replaced with The Savoy Cinema. 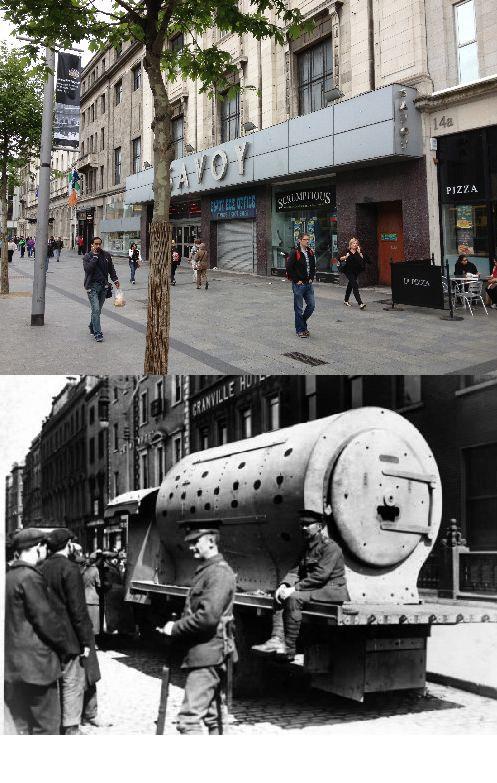 British Officers pose at The Parnell Monument with the captured Irish Republic flag that was hung from the GPO during Easter Week. The flag was placed in the Imperial War Museum in London until 1966 when it was returned to mark the 50th anniversary of the Rising. 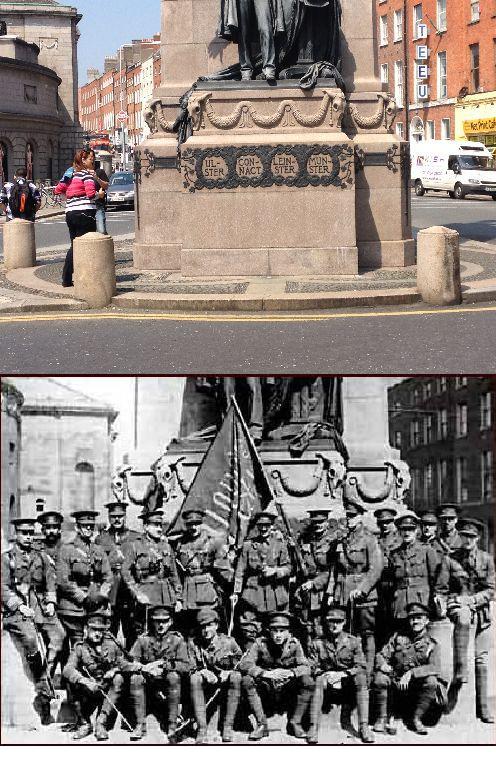 This old photo shows members of Cumman na mBan marching down Parnell Square in the time leading up to the rising. The modern day Garden of Remembrance commemorating the Rising & the War of Independence is further up on the left in the new photo.

The shattered remains of The Imperial Hotel as it was then & Clery’s Department Store on O’Connell St as it is now. 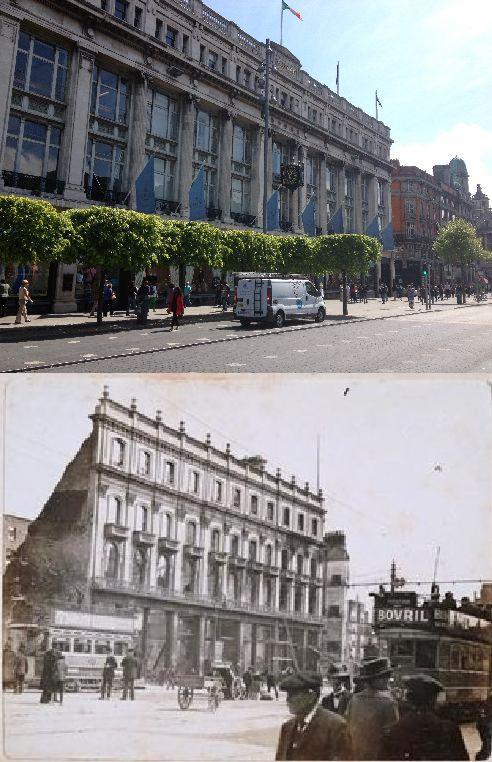 This photo shows troops from the Sherwood Foresters regiment resting after what was a truly horrific baptism of fire.

Most of these were raw recruits who were driven time and time again into a wall of fire from the Rebel positions overlooking Northumberland Rd and Mount St Bridge. Although this position could easily have been by-passed the British generals were determined not to be diverted by what they assumed was an unruly rabble.

They couldn’t have been more wrong!……….The position was held by fighters of such tenacity that even the British officers afterwards suggested that if they had men of such calibre fighting against the Germans the war on the Western Front would have been much easier.

These troops were part of a regiment which at the start of the afternoon’s fighting numbered about 1,000 but at the time this photo was taken they had suffered over 270 casualties on a strip of roadway only about 200 yards in length.

The area has changed incredibly little since then with the obvious exception of the tree which has since grown and is obscuring some of the view across the road. 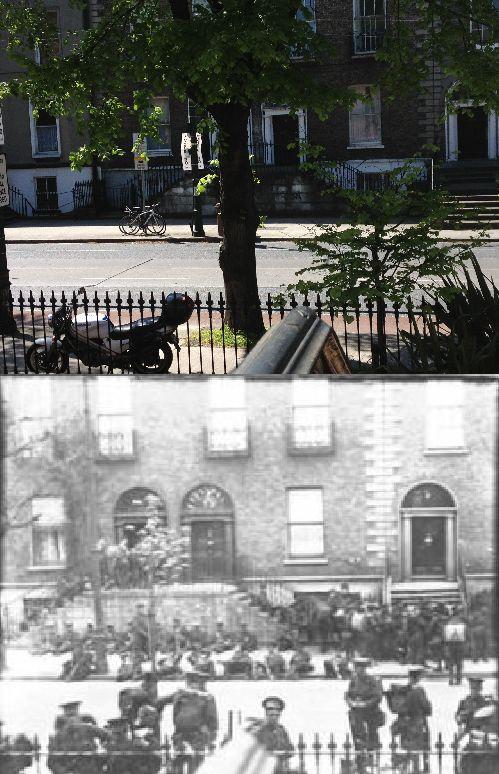 Rubble strewn across Church St Bridge. This is looking towards Arran Quay from the bridge.

Troops from The Dublin Fusiliers pass the GPO after the rising. The scene today is a lot more tranquil.

Looking towards College Green from Dame St with Trinity College in the background. Many of these cavalry troops would have been shocked to find themselves amid scenes of such carnage in what was then considered to be the second city in the British Empire, instead of The Western Front for which they had been trained.

Looking towards the Four Courts from the Bridge at Church St.

The Four Courts were taken over by Commandant Edward Daly on Easter Monday 1916. It turned out to be an excellent choice of buildings to commandeer due to both it’s strategic location and it’s strength as a defensive position.

The Garrison were able to hold out against several British attacks and when the GPO was evacuated the intention was to move the entire Rebel Headquarters there. It was only when Pearse witnessed civilians being gunned down by British forces in the Moore St area that he decided to abandon this and surrender, in order to prevent further loss of life. 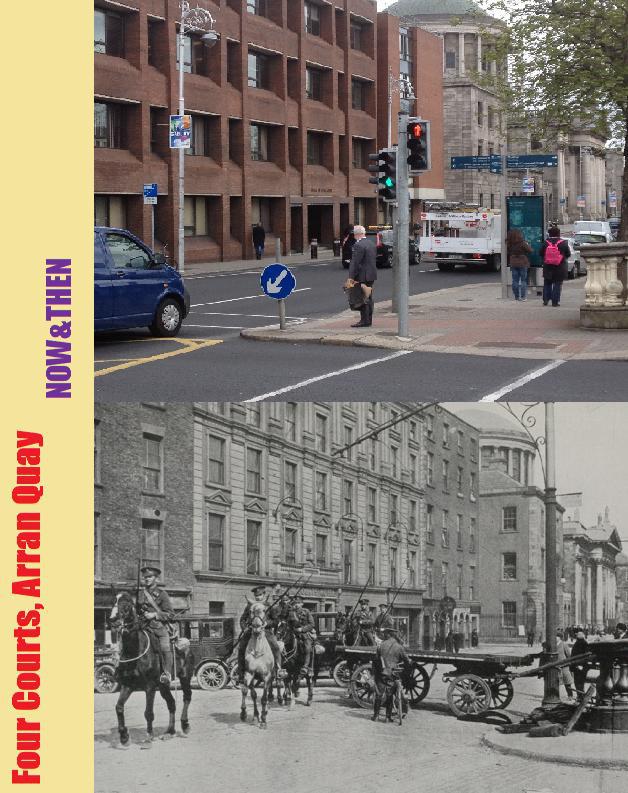 Read all about it!- A rather bewildered looking newspaper seller outside the GPO shortly after it was turned into a ruin. What stories those eyes could have told…. 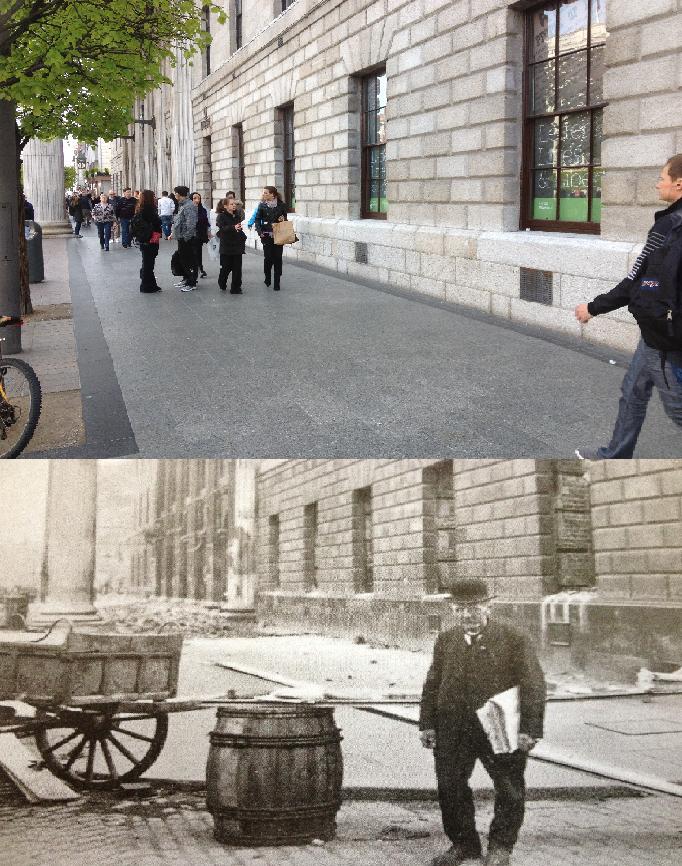 On Easter Monday 1916 Davy’s Pub, now The Portobello Pub was taken over by The Citizen Army and used as a base to engage troops coming from the far side of the Canal at Rathmines. One of the group was a young James Joyce who worked in the pub as a bottle washer. Apparently there was no love lost between himself and his boss Mr Davy as upon entering with his Citizen Army comrades Joyce was abruptly given a weeks notice from his boss. The reply has gone into legend…….. ‘Well I’m giving you five minutes notice’ followed by some shots from his rifle. Mr Davy and the punters quickly vacated the premises.

The rebels held the British at bay here for a time but were eventually forced to make their retreat towards the City Centre under heavy fire. Taken from the bridge at the junction of Georges Quay and Tara St. The pub on the corner in the old picture has been demolished since then but the one next door still stands. The building between Kennedy’s Pub and the Loop Line Railway bridge has since been demolished to create what is now the entrance to Tara St. Train Station.

If anybody has any ideas what the women are carrying we’d be delighted to know. We can only presume it’s food or medical supplies or both. 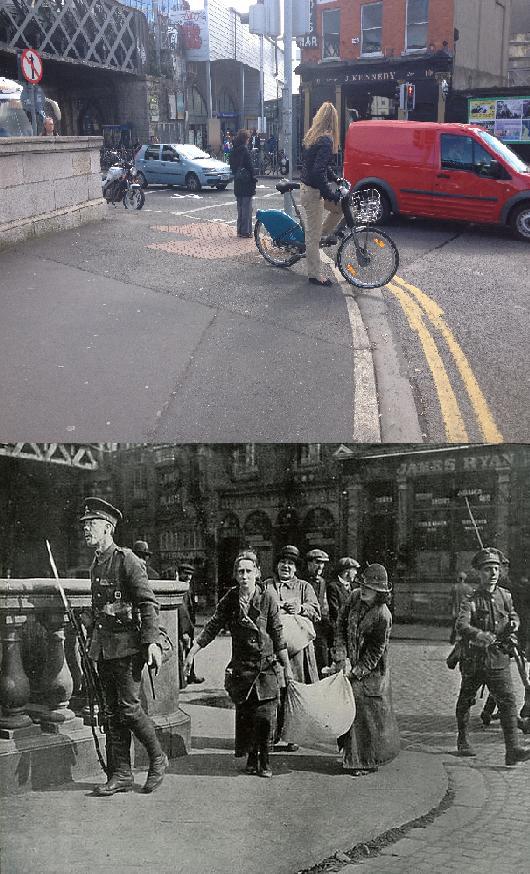 Looking across Lr Mount St Bridge towards the Schoolhouse on Northumberland Rd. The hoarding in the older picture would have been riddled with bullet holes as it was used to cover the final British assault on Clanwilliam House.

The original picture must have been taken shortly after the rising as that would explain the checkpoint. The scene on the same bridge would have looked vastly different on the afternoon of Wednesday April 26th as the road would have been full of dead and wounded troops from the Sherwood Foresters and South Staffs regiments. Several cease – fires had to be arranged during this battle to tend to the many wounded. 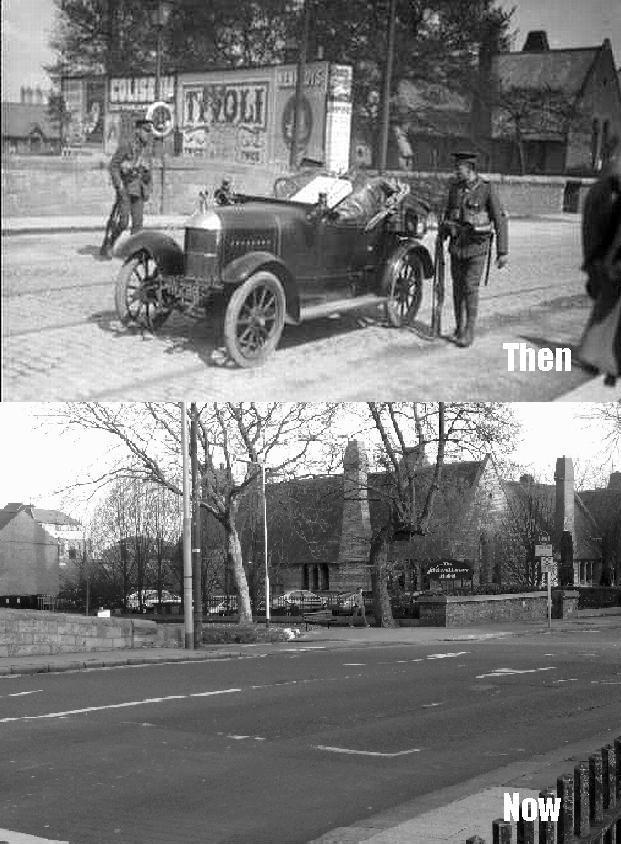 den Quay then & now looking across the Liffey from Burgh Quay. The devastation caused by the intense artillery and incendiary bombardment can be clearly seen here. A gunboat called ‘The Helga’ was used after being anchored by the British at Sir John Rodgerson’s Quay. This area was also shelled heavily with incendiary shells from howitzers that had been brought up from Athlone earlier in the week. 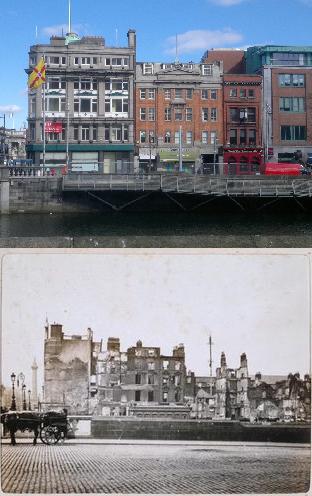 City Hall as it was then and now. This building was taken over by Rebel Forces shortly after noon on Easter Monday 1916. Ferocious fighting then ensued in the hall itself and also in the surrounding buildings. It was finally re-captured by Government Forces the following day but only after both sides had sustained extensive casualties. The Rebel’s were up against The Dublin Fusiliers and the irony of this situation was summed up when during the re-capture of one of the buildings facing City Hall a young volunteer was confronted by his brother in a British Army uniform who promptly told him in a broad Dublin accent to cop himself on & go home.. 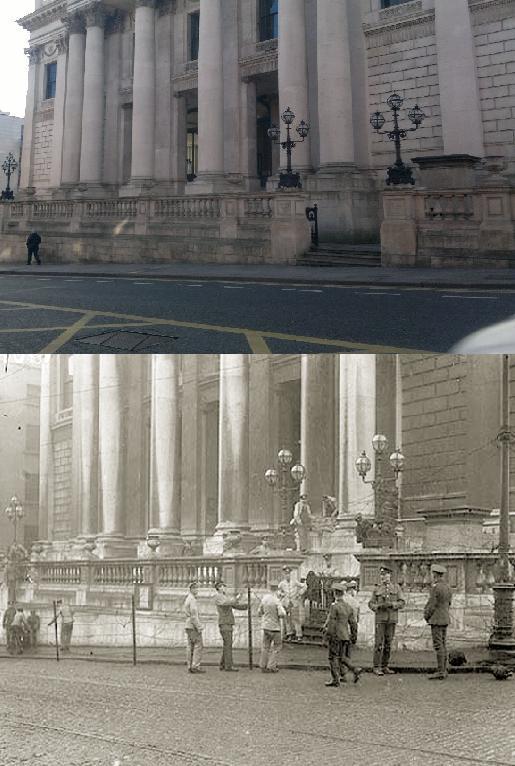 Eden Quay then & now… An eyewitness who had just seen these republican prisoners being marched away into captivity on Sunday April 30th 1916 commented: ‘It’s a sight I shall never forget. That thin line, some in the green uniform of the Volunteers, others in the plainer equipment of the Citizen Army, some looking like ordinary civilians, the others looking mere lads of fifteen, not a few wounded and bandaged, and the whole melancholy procession wending it’s way through long lines of khaki soldiers. But down – hearted — no! As they passed, I heard the subdued strains of the scaffold song of many an Irishman before them – ‘God Save Ireland.’ Dockers, labourers, shop assistants, all conditions of men; all have the same look of defiance which will haunt me to my dying day. Whatever else they were, they were not cowards. If they had been at the front and accomplished what they had accomplished in the face of such odds, the whole Empire would have been proud of them, and the whole world ringing with their praises.” (‘The Easter Rebellion’ – Max Caulfield) 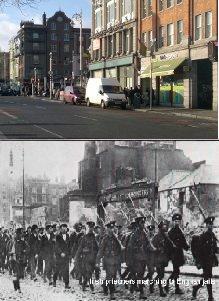 British troops looking into Merrion Square from the northern side of the Square. The house in the background sits on the corner of Merrion Square and Clare St. 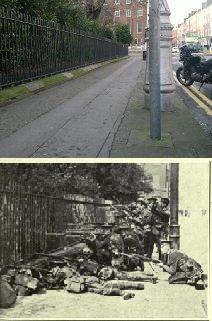 25 Northumberland Rd. You can see the damaged downstairs side window in the old photo. Michael Malone & James Grace held the house for 5 hours and fought off several assaults until they were eventually overwhelmed. Malone was killed in the final British attack & Grace somehow escaped amid the absolute confusion. Both volunteers were under no illusion about what was heading their way. The doors were so heavily barricaded that once the building was sealed there was no way of getting any food in. Malone made a point of ensuring that there was plenty of drinking water available in every room of the house, he obviously had some inclination of the ferocity of fight that lay ahead.

They inflicted devastating casualties on the British infantry during their assaults. The area of Northumberland Rd and Mount St Bridge was defended by 17 lightly armed volunteers. On Wednesday April 26th they were attacked by over 1000 troops. In the 9 hours of fighting that took place here the rebels inflicted some 270 casualties on their opponents and suffered extensive losses themselves before conducting a fighting withdrawal.
It has been described afterwards as ‘Ireland’s Thermopylae’ due to the fact that so few were able to hold off such a large force for such a long time, partially due to the fact that in both battles, a large attacking force was funnelled into an area so small that their vast numbers became as much of a hindrance as an advantage.

Several cease-fires took place during this battle to allow for the many wounded to be attended to and much praise was heaped on both sides of the engagement afterwards for allowing it to be conducted as a ‘clean fight’ albeit a desperate one.

The bombed out shell of the GPO when the fighting had finished contrasts with the modern refurbished facade. What is now a landmark functioning post-office was left an utter ruin after five days of intensive fighting.

Taken from the junction of Lr Merrion St & Merrion square. The troops have their guns pointed in the direction of what is now Govt Buildings. Both photographs illustrate how little has really changed in the area. 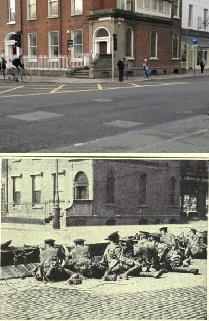