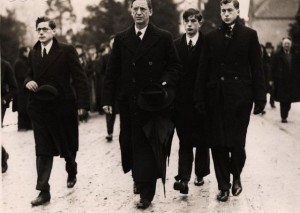 Dev and his sons leaving Glasnevin after the burial of his son Brian de Valera. Brian was killed in a horse riding accident in the Pheonix Park Dublin.Just as an added bit of info: The headstone over Devs grave is the very first one placed there for his son Brian, with Dev and the wife being added to it later. Other members of the family are buried either side. Sean McEntee is buried directly behind Dev, and has a more or less identicle headstone as Dev.