First Account
The account below is by Brian O’Donchu, Frank Busteed’s grandson. Can anyone, especially our North American members, tell us more about Frank Busteed’s time in North America? Or give a point in the direction of where this information may be obtained? We await your replies. Thanks for your time.
FRANK BUSTEED (1898-1974)
Vice-Commandant, 6th Battalion, 1st Cork Brigade
(Commandant -Flying Column) 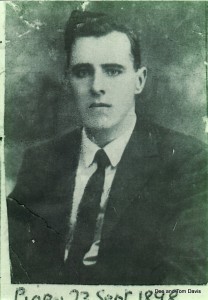 Frank Busteed was born at Kilmuraheen, Doughcloyne, Cork on 23rd Sept, 1898, but grew up in Blarney. 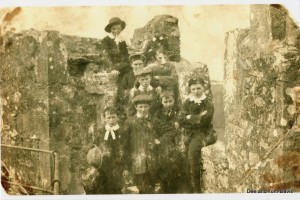 Frank with Friends on top of Blarney castle

Above, Frank, aged 7 on top of Blarney Castle, with school friends

He was somewhat unusual for a Flying Column Commandant in that his backround was not typical, being of mixed faith. His father Sam was Church of Ireland and of strong Unionist backround, while his mother Norah (Condon-Maher) was Catholic and of a strong Nationalist backround.

Sam died in 1900 when Frank was two years, and so he grew up in the Nationalist tradition of his mother.

However, he maintained close family ties with Protestant relations throughout the War of Independence and afterwards.

Two of his four brothers were brought up in the Unionist tradition at Kilmuraheen by his paternal grandmother -Margaret Busteed, and joined the British Army, were mentioned in dispatches during World War 1, and one (Jack) later was stationed in Blarney during the period 1919-22.

He himself claimed to be Atheist.

He joined the Fianna Eireann, and later The Irish Volunteers, joining the Blarney Company (in 1919 the company was into the 6th Battallion, 1st Cork Brigade), and in 1920 was appointed Vice Commandant of the 6th (and Commandant of the Flying Column, attached) with Jackie O‘Leary as Commandant of battalion. 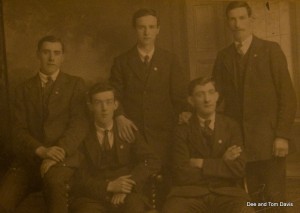 He was involved in many a maneuvre with the battalion and flying-column in the period 1920-22 – including the blowing-up of Blarney Barracks, the capture of Major Geoffrey Compton Smith, Dripsey Ambush as well as countless more. He was also involved in Intelligence gathering, and served as a judge in the Republican Courts from 1920-1923.
He was the first volunteer in Blarney to own a Lee Enfield rifle (see framed photo in exhibition), in 1919.

He was a well read man, and learnt Irish during the war period (regretting that it was not on the school curriculum when he attended). 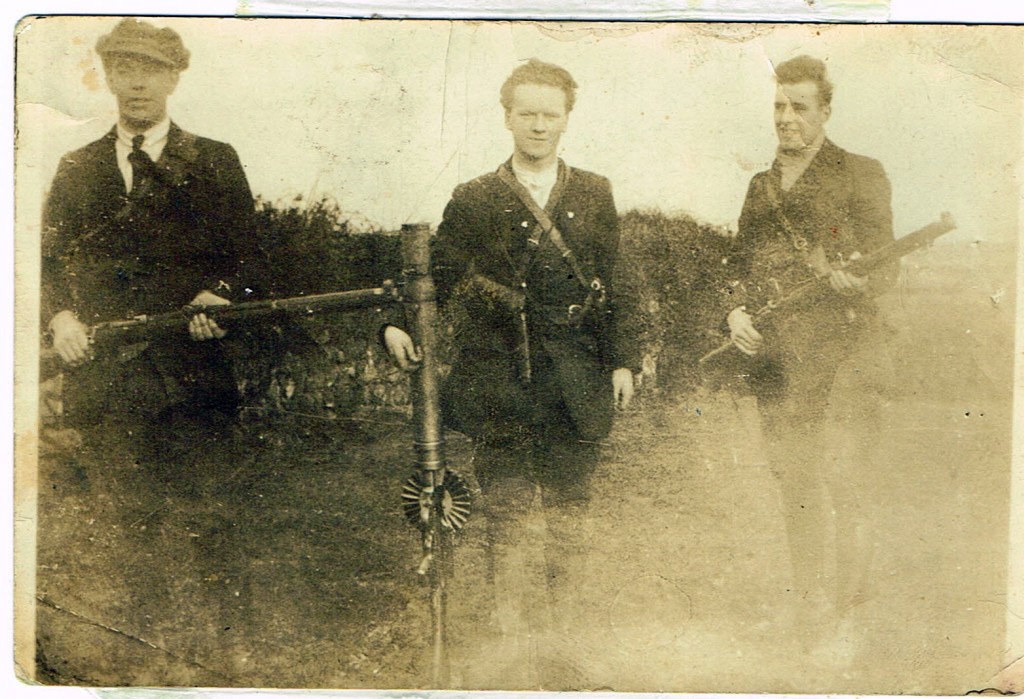 He refused to accept the Treaty and continued fighting in Cork, Waterford & Limerick, eventually leaving Ireland for U.S.A. in 1924 – first to Boston, and later settling in New York.

Here he trained in the ice-cutting business, starting a company with three partners (who had also arrived in America after the Civil War.

He met his future wife in New York – Anne Marren, an English lady, whose father came from Mayo. 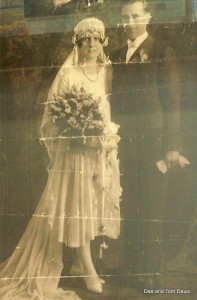 They had seven children in all, 6 surviving (1 died an infant) – three born in USA, one in England, and 3 later in Ireland. 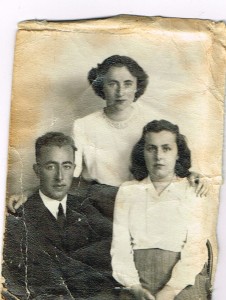 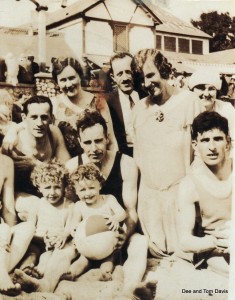 In 1935 Frank returned to Ireland, starting his own family business, and among other things became involved in the development of the Fianna Fail Cumans in Cork City.
In 1941 he was commissioned to the Irish Army as a Lieutenant. He remained in the army until 1946, and though recommended by his commanding officer for the rank Captain, he left to deal with family business commitments. 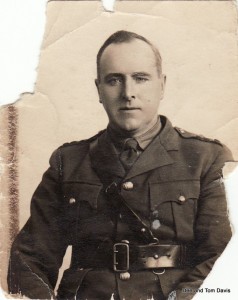 He remained involved in politics, canvassing in local and national elections (see photo with Pres DeValera in exhibit). 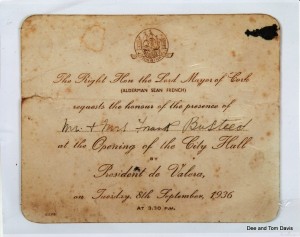 Invitation to the opening of the new Cork City Hall, in 1936 (it was originally destroyed in 1920, during the British burning of Cork City) 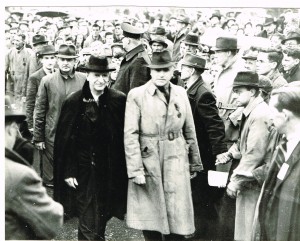 In the 1950′s he was appointed Manager of the Passage West Labour Exchange – retiring from this position (ironically this is where his father’s ancestors first settled in Ireland in the mid 17th century) .

In 1974 (just before his death), the book EXECUTION (based on events around The Dripsey Ambush) was published.

Information required on the men below: following Volunteers (and buddies of Frank all) –

Grew up in Blarney, Co Cork

Assisted in hoisting the Tricolour on top of Blarney Castle, 1917!

He was very active in the battalion area MId -Cork/Nth Cork, Cork City during the War of Independence, in planning manuevres, in ambushes, raids on Brit. Army, intelligence gathering, and in training (and the kidnapping of the spy Mary Lindsay (Feb, 1921)),whose betrayal of an ambush near Dripsey resulted in the execution of 5 Volunteers, and in her own execution and that of her driver), the arrest of British Intelligence Officer Major G. L. Compton-Smith, in Blarney (Apr.1921), intercepting Brit. Intelligence, allegedly, the kidnapping and execution of three active undercover British Intelligence Officers, near Macroom (April, 1922), disabling of key enemy transport lines).

His backround was mixed, religiously and culturally, but he knew both sides of his family well. He grew up in his mother’s house and Nationalist traditions (his father had died when he was 2), though he regularly visited his paternal grandmother, and family, including his 2 older brothers who were brought up by her, in the Unionist tradition. (One of these brothers warned Frank of imminent arrest in 1921, resulting in his escape, while the other later gathered intelligence to assist him in apprehending their mother’s killers – in a raid on her home in March, 1921).

He had served two prison sentences in 1919 (and where he tried to learn Irish), and became Blarney Company Capt. after, and from late 1920 was regularly on active duty with the battalion, sometimes on the run with the battalion, and on his own. During this period he was a Republican Court judge, sitting with 3 others regularly, from 1920 to 22.
During the Civil War he was on the Anti Treaty side, as Commandant of his battalion was involved in many engagements and planning same, seeing action in Co. Cork, Limerick and Waterford.

Went to U.S.A in 1924, first Boston, eventually settling in New York for 12 years, maintaining close connection with the Irish community there. He went into business, married and started a family.

After De Valera came to power in 1932 he wanted to return to Ireland, and in 1936 the family settled in Cork City. He became involved in local politics, particularly in organising the Fianna Fail cummans in the city.

In 1941 he joined the Irish Army, as Lieutenant. He was recommended for Capt. in 1943 (he did not take this up). He left in 1946, leaving to allow more time to run a family business, though remaining active in local politics, and involved with former comrades. He had a family of 6 children.

In the 1950’s he worked for local government, and retired from the position of Labour Exchange Manager in 1964. 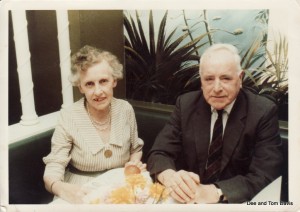 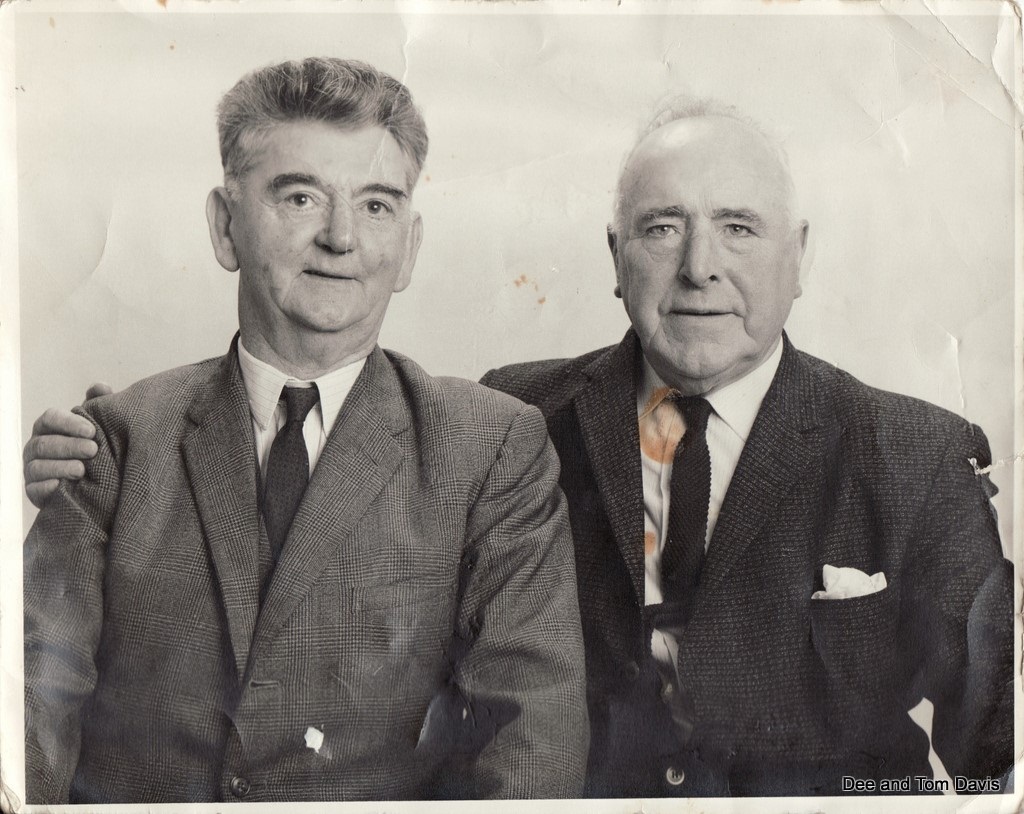 At this time a number of his family emigrated.

Frank was an avid reader and later strongly encouraged it in his grandchildren.
He died in 1974, his wife Anne died in 1975.

He was one of the main subjects of the 1974 book Execution, by Sean O’Callaghan, and featured in the book Lady Hostage, by Tim Sheehan, and in a number of others concerned with the Volunteers, and War of independence. 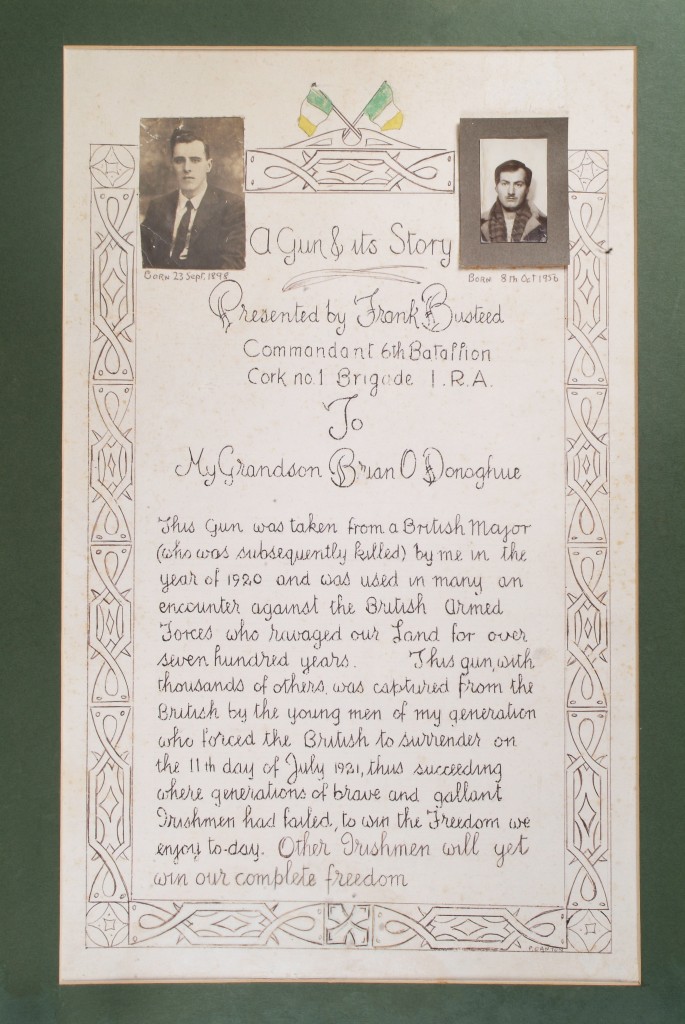 Scroll written by Frank Busteed , detailing the story of his revolver 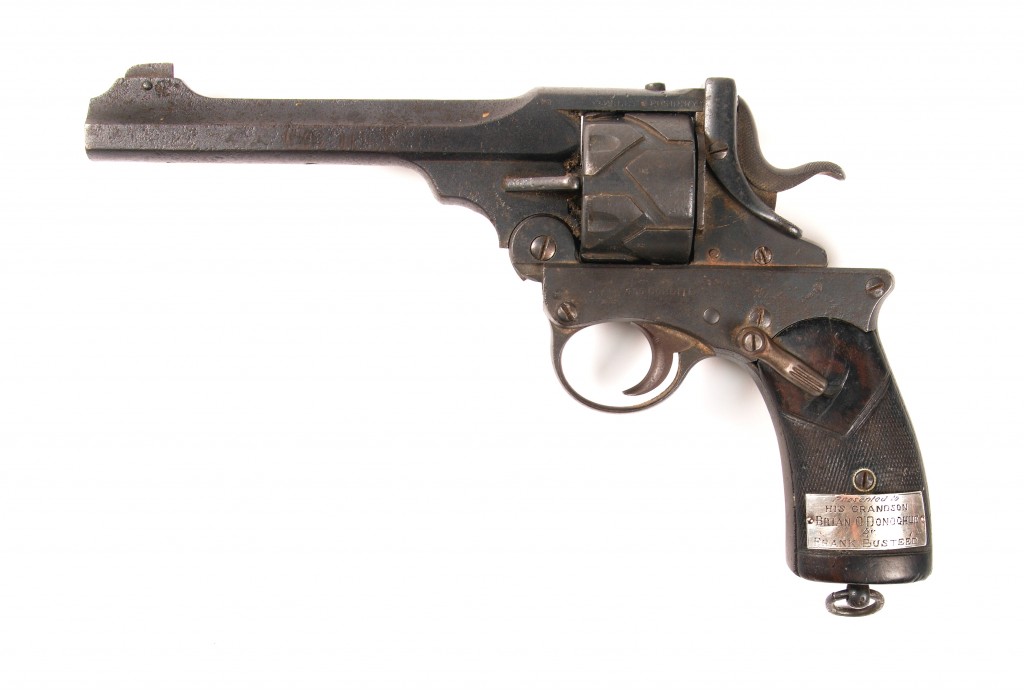 Scroll written by Frank Busteed, detailing the story of his revolver 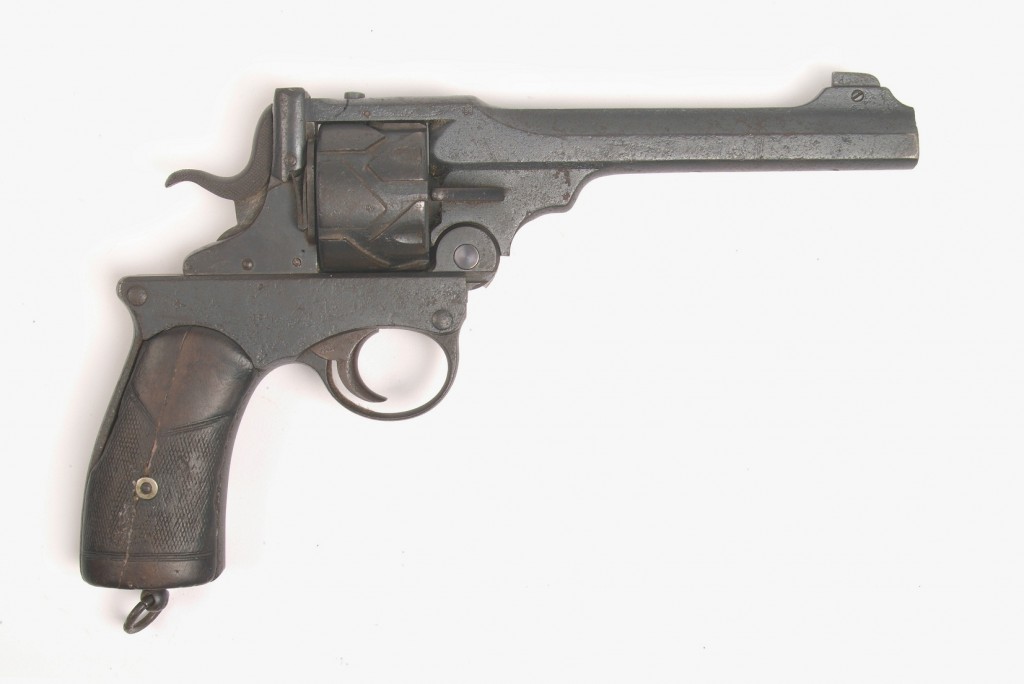 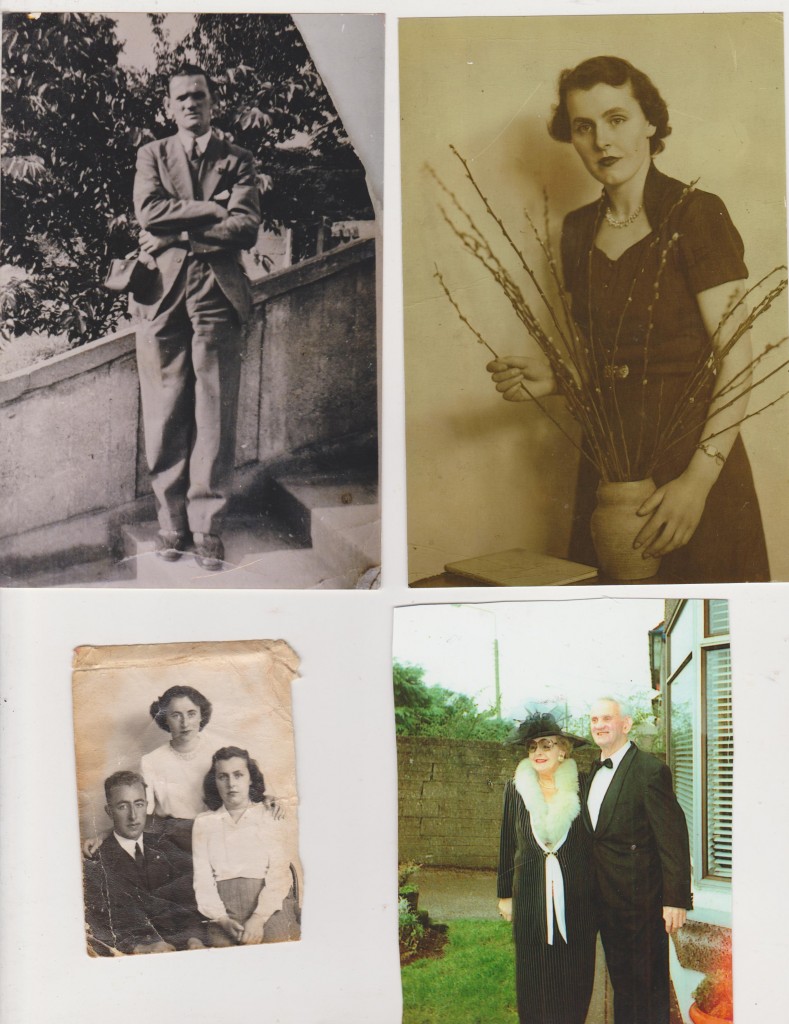