James Langton has sent in the following information and research, thanks James yet again. We appeal to other readers to please try and send in articles and information.

(Note the Murray and O’Broin brothers)

This party was also the colour party at Rossa’s Funeral. 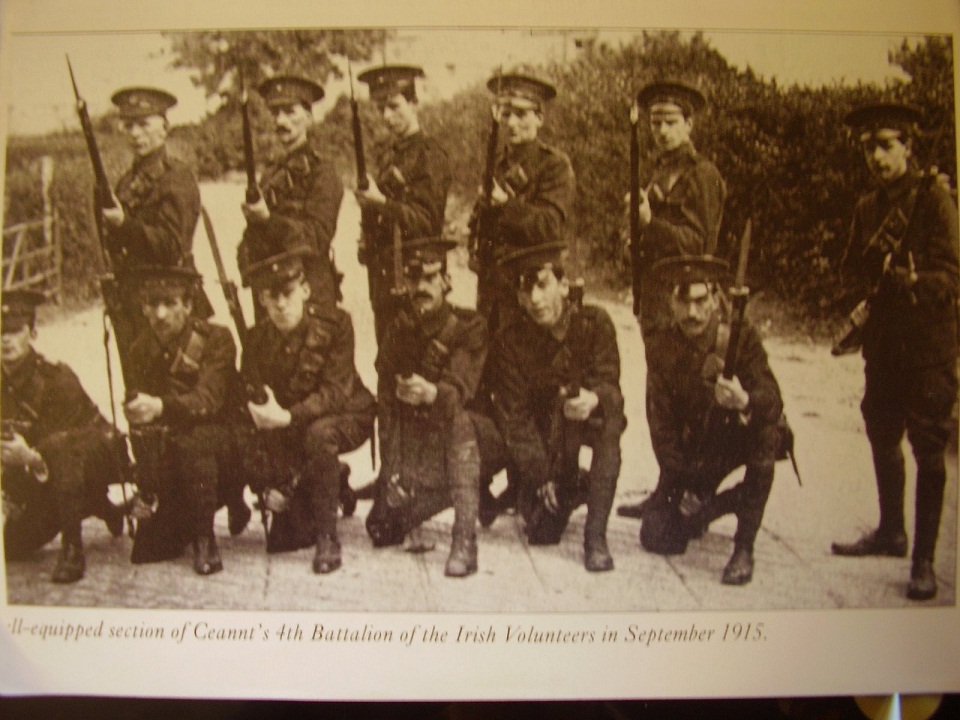 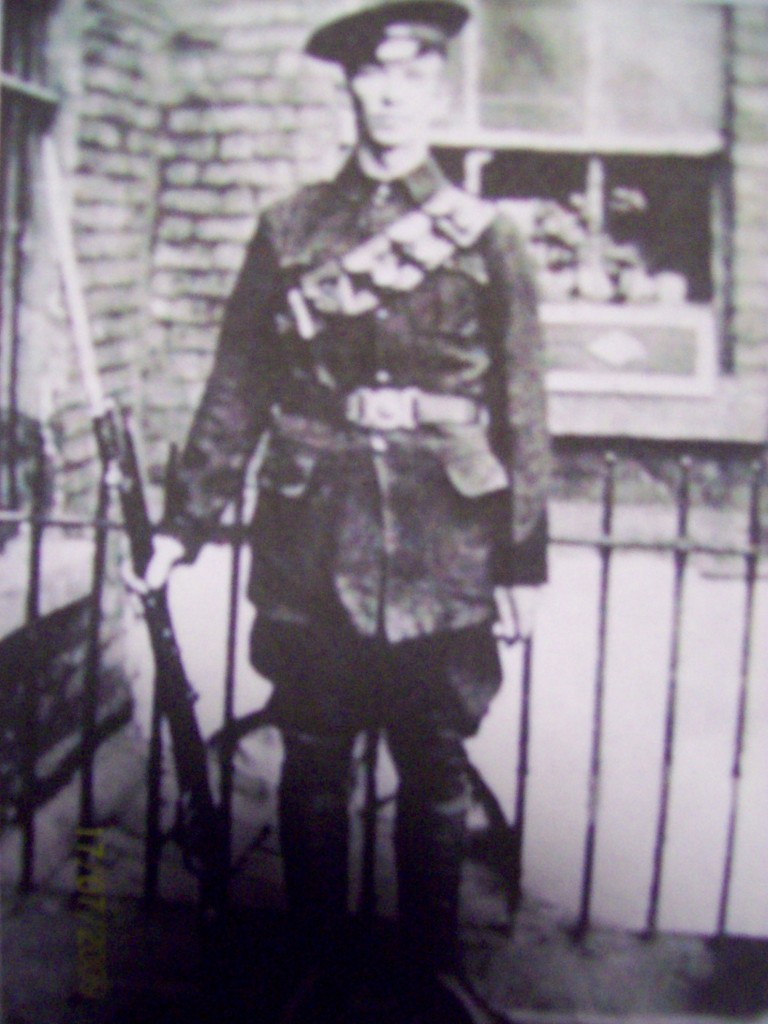 Irish Volunteer Fred Schweppe at his home on Mountjoy Sq 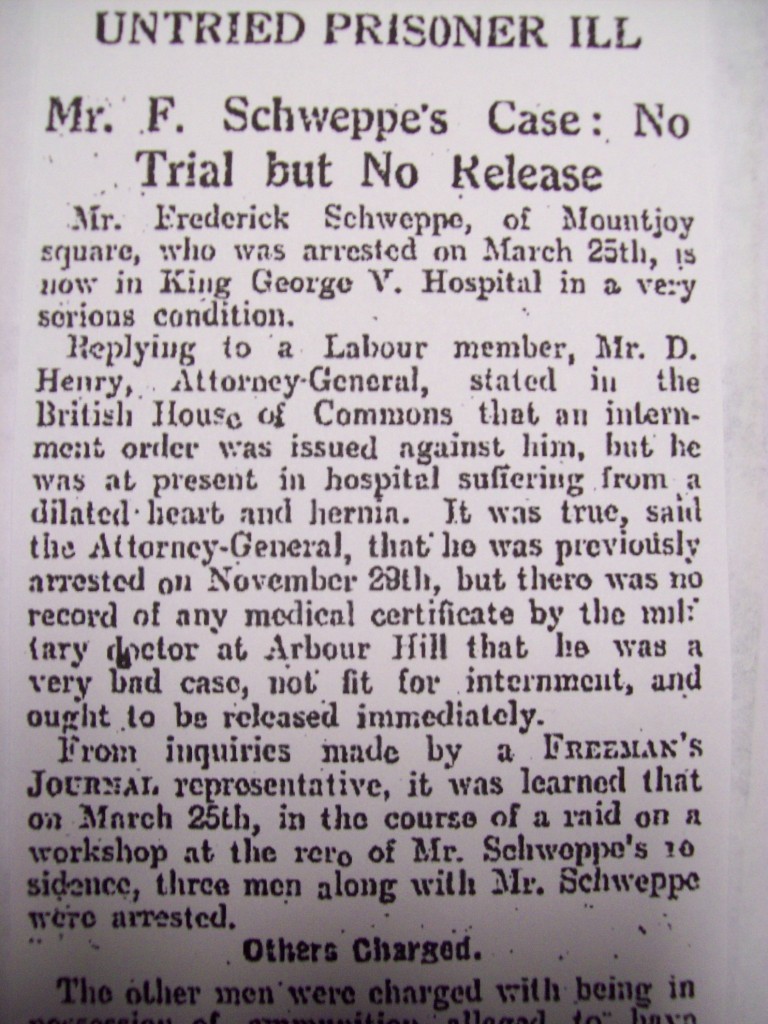 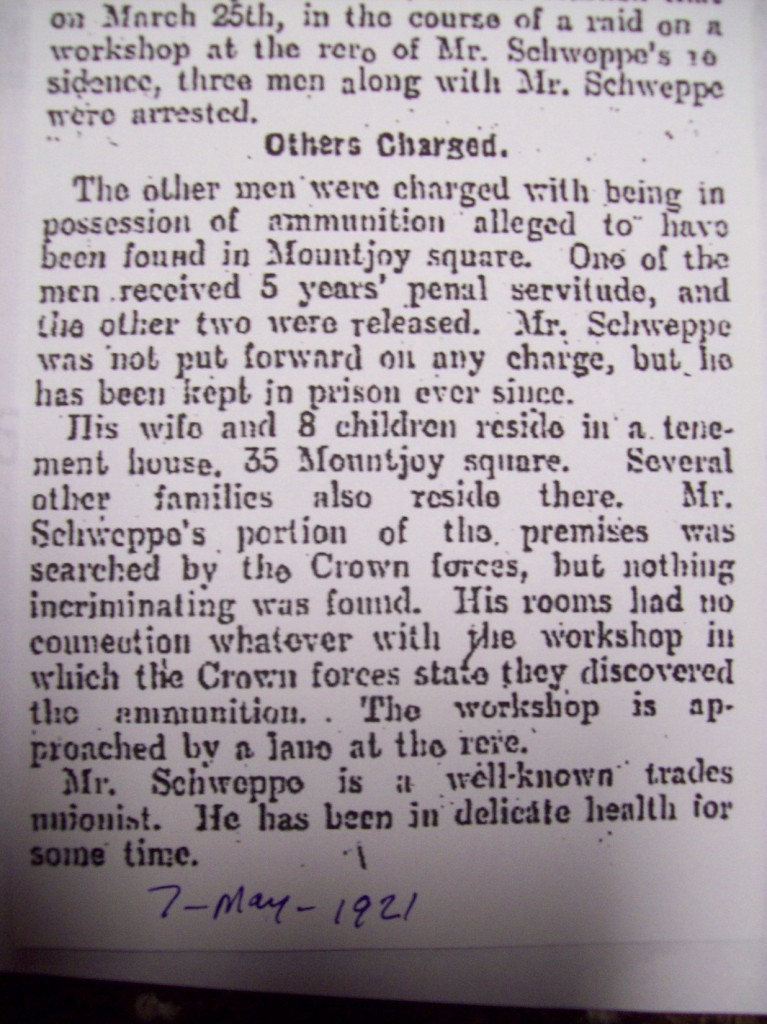 The following is a transcript of a letter about Vol Fred Schweppe written on the 7-June-1924 by Bill Stapleton (a member of the squad).

To all whom it may concern

The bearer, Mr Fred Schweppe was a member of B Coy 2nd Battalion, 1st Dublin Brigade in 1915, when I first joined the Volunteers in that company. Previously, he was a member of a company of the 4th Battalion which paraded at Larkfield, Kimmage, and his company OC was a Mr Murphy, the present Mr Murphy who was lately appointed as one of the three Dublin Commissioners.

Mr.Schweppe took part in company with myself in the “Rebellion of 1916” and was later imprisoned with me in Knutsford Cheshire (where General Mulcahy was also imprisoned). And interned at Frongoch, Wales, for his share in the activities for that year. After his release, he reported to his old company and was one of the hardest workers on the re-organisation after 1916, and was promoted to section commander.

At the commencement of the more serious activities against the British, he volunteerd to take part in any serious affair such as raids, ambushes etc. At this time, I was 1st Lieu. Of B Coy 2nd Battalion, and Mr Schweppe had been further promoted to CQMS and was responsible for the care of several dumps belonging to the Company and of some belonging to one of the Active Service Units, called the Squad, of which I was a member.

At the height of hostilities against the British, he was considered by myself and all the officers of the Company, to be one of the most fearless and willing men of the I.R.A..He was directly responsible for the successful conclusion of many engagements against the British and the fact that he took such grave risks whilst the father of a large family, gives some indication of his loyalty to the cause, for I remember isolated cases of single men being unwilling to undertake the highly dangerous enterprises for which he cheerfully volunteered.

He continued his activities courageously and well, until finally arrested and again interned in 1921, when he was released from the Curragh, having fallen ill during internment. On his release, he found it necessary to enter a hospital immediately, on leaving as a convalescent. After the ratification of the Treaty, he was given a job as a censor at Maryborough Gaol. After some time he was granted sick leave and had again to enter a hospital on leaving which he entered Marlborough Hall (then a military hospital), from which he was finally discharged, being informed that he could not be detained therein as he was not a member of the Free State Army.

He was thus after several years of yeoman service to the Cause, and having suffered many hardships , left as he is today, broken in health and in very strained financial circumstances.

I would point out that Mr Schweppe was on several occasions offered a commission in the National Army on account of his services, but was conscientious enough to refuse acceptance, knowing that he was physically unfit. Has the commission been accepted, the conclusion of hostilities would have offered him an opportunity of demobilisation with Gratuity and Supplementary Grant, but he has never asked for any reward other than that for which we all fought; namely, the Freedom of the Nation, and it is on the advice of his friends, that he has consented to the compilation of this recommendation.