Apologies if this email is not something you might be able to help me with.

I wonder if there is anyone at your organisation who might know of my Great Aunt who died as a young female despatch rider during the conflict. Her surname was Donovan (or O’Donovan) and she was reportedly shot during an incident or executed by the Black and Tans. I am not sure of the date but she would have been about 17-19 years old at the time of death which might have been recorded somewhere and might be in the records? Apologies for not knowing her first name which I recall as being Mary/Margery/Margaret.

Her sister (my long dead grandmother) was Honora/Nora (O) Donovan.

There was a Ross in the family name but apparently that was dropped by the family who were a farming family from Cork. 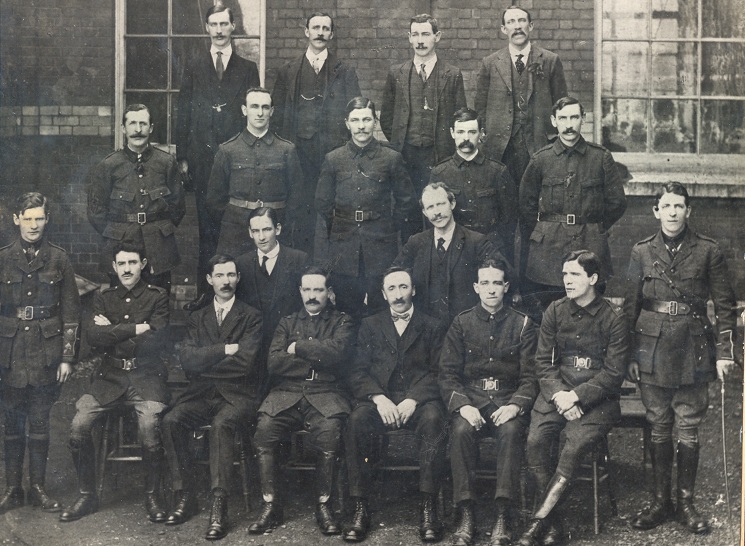 I’m trying to find ancestors of Hurley’ involved in the 1916 Uprising from Cork’ thank you s very much’ O.E.Murray’ from Vancouver Canada.

A Tale by Vincent Corrigan:

ce hay shin amoiugh
A bfuill faor are a guth
O her sibhual slifte is gleanuntaMise Emon a conuich
Ata baithe, fuar flicheIris nationalism is still at war.
But, we have gone in the direction of Communicative action. Guns were heavy enough, but the lead ammunition is what reallly weighed you down.
So, we jettisoned weight for speed.
We cover a vast cultural area from 3200 BCE at Newgrange observatory , and everything in between, Gods,Graves, and Scholars.
I grew up over there, but left to get educated. I have sent you my parody of Alices’s Restaurant. for ourThanksgiving. Thanksgiving was originally a Puritan holiday. It was introduced to the natives , and one family was invited, but two hundred showed up. They wre never invited back again.
My current piece is a shiamsa, the story of Irish culture from 3200 BCE., when we were savage fierce and wild.
The setting will be nine days after the solar new years, which has occurred at Newgrange at 10;24 AM for the last 5200 years.
Spiritualism and religion are two different things. Religion is the bureaucratisation of spiritalism
.Religion and Politics  in this Holy season of Advent with a heavy reading list.
And,did you know that the  reason all Chinese leaders hair is black is because they die it?
——————————————————————————————————————————–
I am looking for biographical information regarding Tom Kelleher, his date of birth, parents’ names, and place of birth. Can you direct me to a resource for this information? Thank you.
John Kelleher.
——————————————————————————————————————————–
I am trying to find documentation for my grandfather, John J. Nolan, who we have always believed was involved in the war for independence. He was an Irish tenor who performed via the Walter McNally Opera comapny. He was called Shaun O’Farrell. Can you direct me to any resources I might be able to check?
Thank you,
Maribeth Nolan
———————————————————————————————————————————
Am doing some research regarding my paternal grandfather, Thomas A. O’Connor, born April 1900 Dublin, died April 1949, Brooklyn, NY. He served as an IRA section commander of Company B, 1st Battalion of the Dublin Brigade (1916-1923).. Would like to learn of his actions, and/or any awards/medals he earned to educate myself and my son. My father (born 1941) was to receive his father’s IRA medals upon his dad’s death, but the medals were sadly lost. It would be great to find these for him before he passes someday.
Warm regards,
Rory O’Connor
———————————————————————————————————————————–

I was born and raised in around Castle Street and Grand Parade.Tom Barry used to drink around the corner in Moore’s pub in Daunt Square where a place called Hair Inc opposite the Roundy House as it was called back then.Moore’s pub had a strong republican connection I think one of the son’s was interned in 1971 or 72 again I could be wrong. Moore’s closed down in the 1970s or early 1980s.There was another pub in daunt Square called the West Cork Bar where the O’ Brien’s sandwiches are now.

Also the Old IRA had an office in 83 Gran Parade where McHugh House is now. First floor – the entrance was in St Augustine Street (doesn’t exisit anymore)

Joan Manton the brother of Der Manton ran a shop in Paul Street and he used to pop in there for his shopping or Levis which was near Kilgrew’s toyshop shop in 83 Grand Parade where McHugh House is now. I think he used to get his hair cut at Christy Byrnes or Burns the Barber where Moore Auctioneers are or were. On the corner of Paul Street and the Coal Quay was the Economy Butchers where he used to visit as well. Some more stuff will come back to me but I hope that will be of help. I’m not sure how true this is but I think my Gran used to visit a relative of Michael Collins in Castle Street at No 15 I think there was a butchers on the Ground floor. hope this helps fill in some background.

Hope this helps you with some background colour about the man and the area where he lived during the time as I remember it during 1960s, 1970s and early 1980s.

I am tracing the history of Volunteer Gerald Keogh, who was killed in front of Trinity College on Easter Tuesday 1916. Gerald was half-brother of my grandfather – Bartholomew Keogh.

Regarding the republicans who were buried in Glasnevin, what is the difference between the “Republican plot” which is close to the main entrance of the cemetery and the “1916 plot”, which is on the other side of the road in a small field belonging to the graveyard? Why were the 1916 combatants separated in this manner?

Gerald Keogh is buried in the 1916 plot. He was interred for a time in the grounds of Trinity College before being brought to the city morgue and finally, placed in Glasnevin.

Gerald had access to family grave in Glasnevin. I am, therefore, not sure why he was interred in the 1916 plot; did the authorities forbid his burial outside a mass grave?