It’s just outside Drangan village . Pat in uniform was caught by the Tans making his way into the village and was summarily executed on the roadside where he caught by a single shot to the head, less than 6 months later Martin was killed in action when his column engaged the Tans in an ambush. 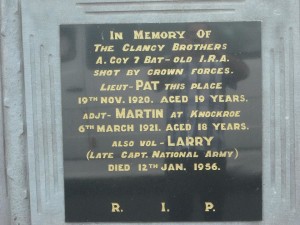