Dear Sir or Madam my name is Frederick Leonard and my uncle was executed on the 28th Feb 1921 Thomas O Brien Model Village,Dripsey. Captured on the 28th January at the Dripsey ambush He was buried in the Republican plot in UCC ,but later exhumed and buried in the Republican plot in St Finbarr’s Cemetery. Can anyone please tell me why ,and how soon after the 28th of February . I only discovered this now while reading up the event Tuesday 20th October. I would be very grateful for any information about my Uncle he was my Mother’s Brother.   Yours Sincerely, Frederick Leonard.email fredpleonard@gmail.com

To whom it may concern,

I am writing a memoir on my grandfather Captain Thomas O’Doherty (1890-1964) who brought the musicians from St. Peters Band to Dublin to form an army band.

Do I need permission to include your article’s image of the St Peters Brass and Reed Band in my memoir?

‘The Irish Volunteers Commemorative Organisation have the following post:

‘St. Peter’s Brass and Reed Band-research:  The following Belfast men were “attested” into the Free State army on 7 February 1923 and assigned to the “Special Brass Band”.  Most gave their occupation as “musician” although a few had other occupations.  All except one appear in the photograph. (On the same date and later many more St. Peter’s enlisted, and were assigned to the Infantry).[1]

Some further information:  An R.U.C. Special Branch report to the Ministry of Home Affairs, N.I. dated 6th February 1923 confirms the story that the band marched in a body to the station to entrain for Dublin.  There was prior negotiation between the band committee and the Free State Authorities that the members would be kept together and form an army band.  The men signed up for one year and on average served about 18 months.  By then the Army School of Music had been set up and the older men were demobbed whole the younger men or boys were kept and sent to the School of Music…[2]‘

Do you know where the information on the R.U.C. report was sourced?

If you have any further information on this band or on Thomas O’Doherty, who was a Volunteer I would be extremely grateful.

I am looking for any information pertaining to Thomas Leonard, the former Battalion Commader of the IRA in Dungannon, Co. Tyrone during the Easter Rising, who was in command of the Cookstown Barracks attack. It is known that he was incarcerated at Wormwood Scrubs ca. 1920’s.  We believe he was held at Belfast prior to being sent to Wormwood and that he did participate in the hunger strikes. He was sent to Marylebone Hospital at some point.   Thomas Leonard was my wife’s great grandfather.  Thank you all.

Hello, my name is Kate Doyle and I am a 5th year history student in the Presentation Secondary School Thurles, for my leaving cert history project I wish to carry out some research on a relative of mine ‘’ Judge James J Comerford’’. I have found a small amount of information on your webpage and was wondering have you anymore information about Judge James James Comerford or possibly some contact details for the your source of information John Coffey ?

Thank you very much for your time I appreciate it greatly

To Whom It May Concern –

I was delighted to find my grandfather, Timothy (Ted) Buckley and his friend, John (Sean) Keating in two photographs on your website.  The link to the location on your site is  https://irishvolunteers.org/old-na-fianna-eireann-4-th-battalion/

The photographs are of the Munster Fianna Eireann in Cork in 1922.  The first photo is of the entire group of attendees and the second one is the second in the subsequent group of close ups.

The description/identification on the group photo should be revised to include the information below.  I’ve highlighted the information outline for other identified people in the photo and italicized additional information that you may choose to also include:

I’m attaching a link to the actual photos with notes on them for your records.

I’ve copied Matt Larkin who is Sean Keating’s grandson.  Please let me know if you have any questions and confirm that this information has been updated on your website.

I hope you are well.

I am enquiring about https://irishvolunteers.org/the-volunteers-irish-citizen-army-ira-cumman-na-mban-photo-file-part-3/north-longford-flying-column-2/ 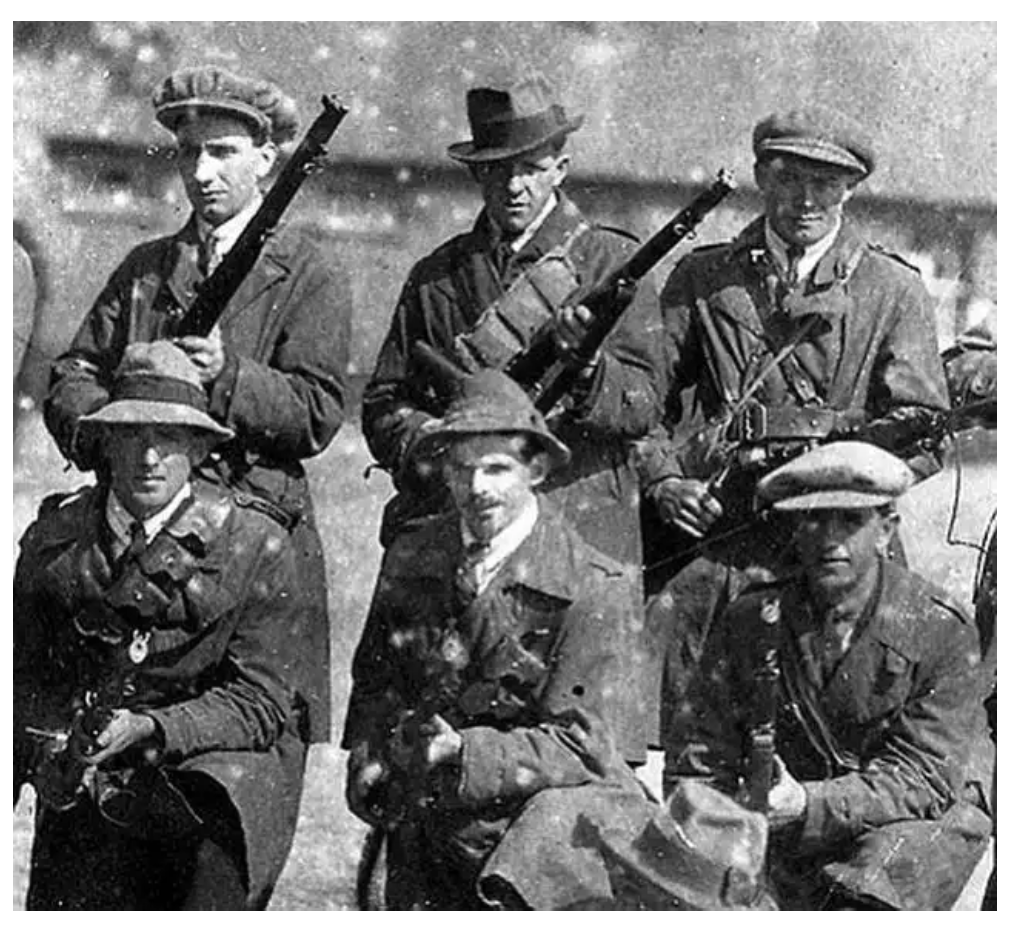 I wonder if you have access to the entire photograph and, even better, whether the volunteers have identified by name. I’d love confirmation whether my grandfather, Jim Sheeran, is bottom left in the front row. He played a significant role in the Clonfin Ambush on 2 February 1921.

Vols and brothers Both interned on Prison ship Argenta, can you help me find more info?

‘It is love of country that inspires us; not hate of the enemy …’

Terence MacSwiney, the renowned Republican lord mayor of Cork, died on 25 October 1920, on the seventy-fifth day of a hunger strike he started in Brixton Prison in an attempt to gain recognition as a political prisoner of war. His sacrifice brought worldwide media attention to Ireland’s struggle for independence. Principles of Freedom, his collection of political writings, provides a glimpse into the thinking of a man prepared to give his all for Irish freedom.

‘It is love of country that inspires us; not hate of the enemy …’

Terence MacSwiney, the renowned Republican lord mayor of Cork, died on 25 October 1920, on the seventy-fifth day of a hunger strike he started in Brixton Prison in an attempt to gain recognition as a political prisoner of war. His sacrifice brought worldwide media attention to Ireland’s struggle for independence. Principles of Freedom, his collection of political writings, provides a glimpse into the thinking of a man prepared to give his all for Irish freedom.

Fw: A LITTLE KNOWN AMBUSH – BUT NOT FORGOTTEN

Hi, I am trying to trace the connection with my uncle James and Michael Collins, I travelled EIRE with my father John Finegan many times in my youth and I was always told that fathers brother James had a nickname, THE POSTMAN.

I have somewhere in my possession a land registry map of LISNACLAE where my grandfather lived, and each visit we had included a trip to the home and the church, to visit the family grave.  My memory suggest this was MARACLOONE.

Any help you can give me would be greatly appreciated.

I’m trying to get some information on Sam Ruttle, Adare, Co. Limerick who is listed as a prisoner at Frongoch in the book The Unknown Commandant by Denis Barry. I’ve seen some lists on the internet but can’t find him. A Sam Ruttle got married in Adare Nov 4 1916. His address is given as Adare. Is it possible he had been released before that date? He isn’t in the Bureau of Military History pensions and medals database. Can you advise me where I might get some more information please? 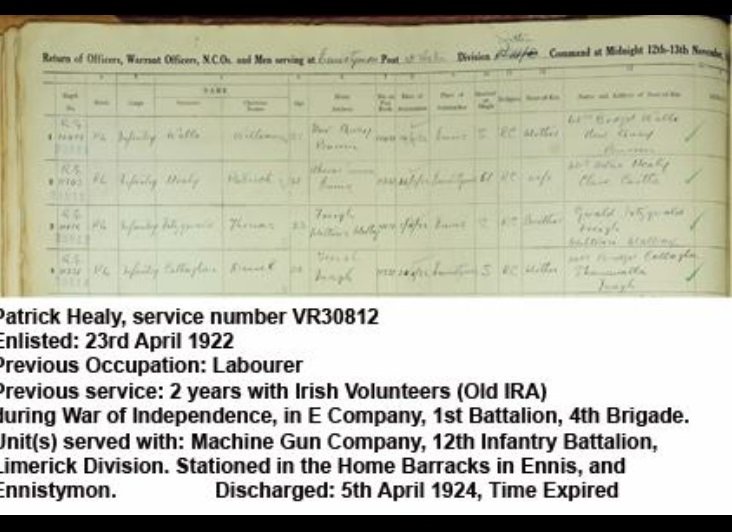 Forthcoming (due mid-November) booklet on the fatalities of the Custom House Fire,by Brian Smith. 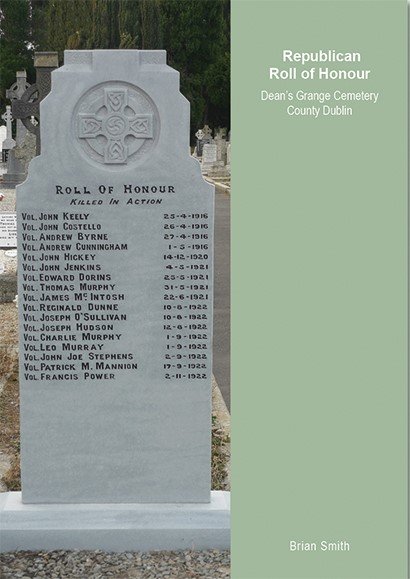 There is a lovely video by an Irish in London group, in which three people play the roles of Muriel, Geraldine Neeson, and Muriel’s mother.

There was a fitting wreath-laying ceremony at Gaol Cross on Saturday, marking the centenary of the death of Michael Fitzgerald after 67 days of hunger strike.

At the time of Fitzgerald’s death, Donal O’Callaghan was deputising as Lord Mayor of Cork for Terence MacSwiney, himself on hunger strike in Brixton Prison. Some of you may be interested in the telegram below which O’Callaghan sent to Seán MacSwiney (brother of Terence) in London, informing him of Fitzgerald’s passing and predicting that a second hunger striker, Joseph Murphy, would only last a few more hours. Like much of his correspondence, it is simply signed ‘O’Ceallacháin’.

Following the death of Terence MacSwiney, it was Donal O’Callaghan who was elected as Lord Mayor on 4 November 1920 – Cork’s third Republican Lord Mayor of that fateful year – and he served as the city’s first citizen until January 1924. 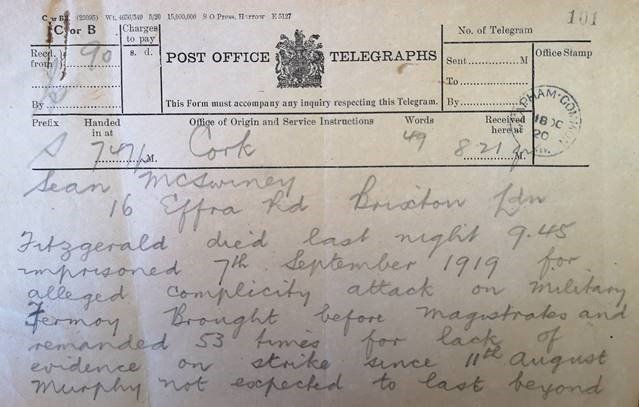 Two more images from the hunger strike that took place in Cork gaol (the site of which is now part of the UCC campus) a century ago. The first image was taken 100 years ago yesterday, and shows the relatives of the hunger strikers, who maintained a vigil at the prison gates, questioning visitors emerging at the portico of the gaol as to their condition. The second shows a new prisoner being led across the stone bridge leading to the gates prior to committal, accompanied a party of 6 soldiers, most of whom are in full battle dress, wearing tin helmets, and carrying rifles with bayonets fixed and live rounds in the magazine. It reminds us that the prison, and the surrounding area around Gaol Cross, was at that time one of the most heavily militarised in the whole of western Europe 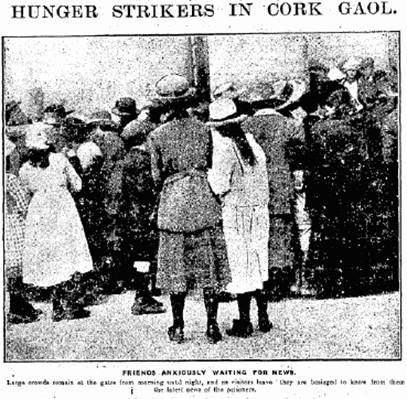 I am an Irish American author writing a seven novel historical fiction series titled The Irish Clans, see website www.stephenfinlayarcher.com. This series immerses my Irish Volunteer characters in the Irish Revolutionary wars from 1915 to 1923.

I need a painting of the war of independence for the front cover of Book Five Revolution. In your August 18, 2011 post you showed a set of three paintings provided by Mr. McGrinder. The third (lowest) image is cut off.

Do you know how I can reach Mr. Grinder since I like that lowest image.

Do you have other posts that show war of independence paintings?

Thank you for considering these requests.

I stand in awe of the Volunteers who fought so gallantly for freedom.

I was wondering if you could you help me find records relating to my grandfather’s cousin, MP McMahon. He was part of the Meelick IRA in the early 1900’s. See below a newspaper article from the Limerick Chronicle in 1921 re his funeral; it seems that it was very big but I can’t find any record of him online.

I do know that when my my Dad was a child, he was given a book by a friend to borrow and show to his father. The book, we think, had a photo of MP McMahon.  However my grandfather subsequently confiscated the book and our family have never seen it since.

My Dad and I wondered if the reason my grandfather confiscated the book was because he was a De Valera supporter and this MP McMahon may have been a Collins supporter, but this is just a theory.

All that my Dad and I know is that MP McMahon was born in 1901, from Ballynantymore, Limerick and died in 1921. However, in the census he is listed as Micheal S A McMahon, which is another thing we can’t understand.

Any information/assistance would be great. See the link below:

I am trying to trace my ancestor Thomas Behans records, he was born in 1895 in Courtwood Bridge and died 3rd August 1939. He was married to Mary Pegnam. He was a member of the Irish Volunteers in 1916 and was part of the Carlow Flying Column in April 1921 at Ballymurphy, he was captured and court marshaled, he spent time in Mountjoy and went on the hunger strike. When the civil war broke out he attached to 4th Batt, Dublin Brigade. I will attach his obituary.

I would be very grateful if you could help me with my quest.

Our Keogh family (relatives of Irish Volunteer Gerald Keogh) had a family Gathering, facilitated by Trinity College on Anzac Day (25th April 2016) the day that Gerald was killed. Together with Dublin City Council we unveiled a plaque to his memory. We also had a reconciliation with the McHugh family (Mick McHugh was reputed to have shot Gerald).

I attach a short overview of the unveiling ceremony and an eerie shot of the window alongside the plaque at #117 Grafton Street.

I attach the article as a pdf (to show how the photos might be arranged) and a word document so that you can do the arranging yourself.

I hope the article will be of interest to the website. 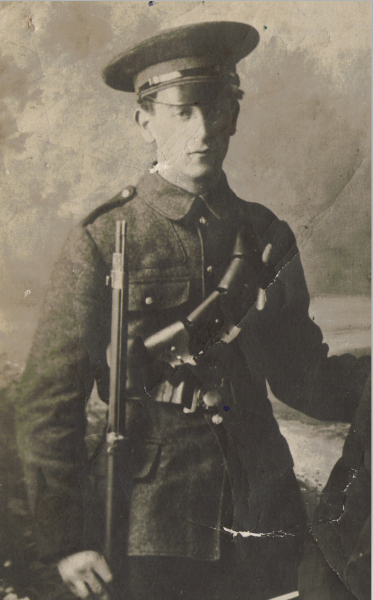 Statue of Cromwell: Should It Go?