The Irish Volunteers Commemorative Organisation handed in their submission, and 5,200 signature petition to Chairman Niall Ring pertaining to Saving Moore St. We had a volunteer dressed up in 1916 Irish Volunteers uniform, also a number of 1916 leaders families,James Connolly Heron, attended.

“Over 5,000 support 1916 Battlefield Preservation.
The Irish Volunteers Organisation will present our submission and petition to Councillor Niall Ring of the Moore Street Advisory Committee on Thursday 31st January at City Hall at 11am. On this the centenary of the founding of the Irish Volunteers in 1913 we are presenting this petition in support of the campaign to preserve and protect the last remaining intact 1916 Battlefield site for future generations.
On a cold wet Saturday morning in Dublin, members of The Irish Volunteers Commemorative Organization weathered the elements to go meet the public in relation to preserving this historic battlefield site. We met at the GPO and proceeded to the streets around the site with a petition to be signed by members of the general public. We were met by a warm and friendly enthusiastic public, eager to chat about the area, it’s importance and its future preservation. We were delighted to see old and young alike approach us and ask to sign. Particularly heart warming was the fact that parents were eager that their children sign also – most important as the children of today are the rightful custodians of our heritage tomorrow.
The campaign to Save Moore Street campaign, spearheaded by James Connolly Heron (great grandson of James Connolly), and relatives representing the executed 1916 Leaders has not gone unnoticed by ourselves and many other historical societies both here and abroad, who have all come together to put their weight behind the campaign.
The Irish Volunteers are an historical Society that aims to promote and preserve the history of the Irish Volunteers 1913 to 1923. We are a non-political and non-profit organization with over 1,000 members.
We hope that what we do will help promote a better understanding of the Irish Volunteers.
Our campaign to preserve this historic area will continue through our signed petition drive to save this battlefield site of national importance from demolition and destruction.
Go raibh maith agat
James Langton
Paul Callery
Paul Fleming

James langton Delivers The Irish Volunteers comemorative Organisation Petition and Submission….along with Paul ,Martin McCiarian,Simon Draper, ,David Kilmartin and others…..with the Grandchildren of Some of the Leaders of 1916 present,Interesting Conversations with the Grandchildren of James Connolly and Thomas McDonagh……as well — at Dublin City hall. 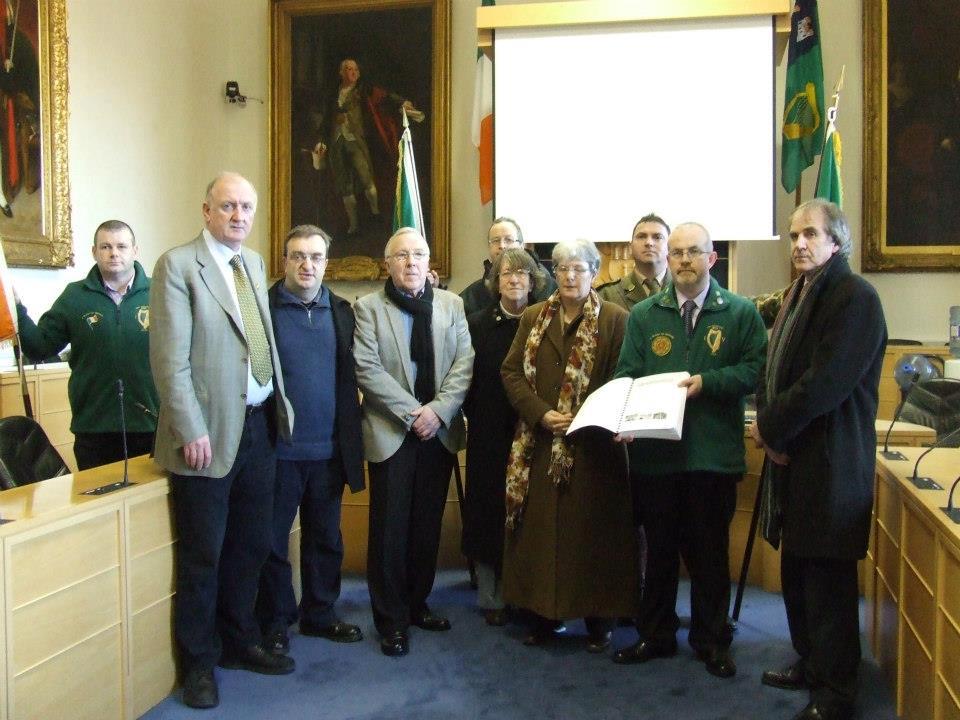 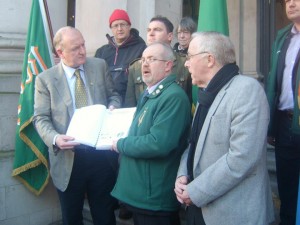 Above: Cllr Niall Ring,James and others 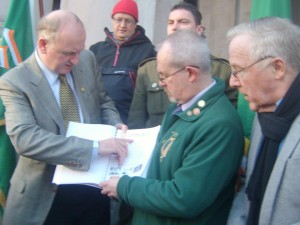 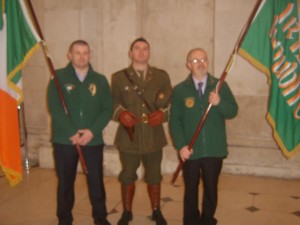 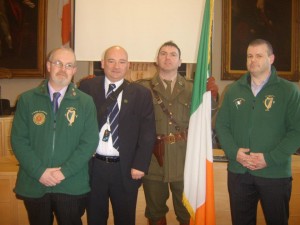 We have an online petition here, https://www.causes.com/actions/1723071-irish-volunteers-organisation-save-moore-street
For those who do not have a Facebook account please send your comments to:
The Chairman, Moore Street Advisory Committee, City Managers Department, Civic Offices, Wood Quay, Dublin 8.

Please make statement on behalf of the Irish Volunteers Commemorative Organisation as we are leading a concerted campaign.