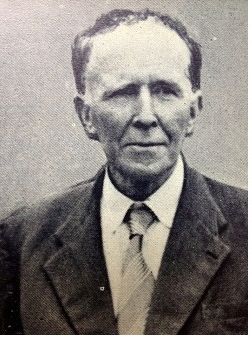 Matthew ‘Mattie’ Neilan was born in Kilcolgan, Co. Galway (c. 1885). After attending school in his native Kilcolgan, he moved to Dublin to train as a teacher and upon completion of his studies he returned to teach in a local school at Coldwood, Craughwell not far from his birthplace. He joined the Irish Volunteers in 1914 and was an officer under the command of Liam Mellows in 1916 where he took part in the small but not insignificant action that took place in and around Oranmore and Athenry in Galway. After the Rising he was arrested along with about 100 other Volunteers from the Galway area (out of about 600 who initially reported for duty) and sent to prison in England and then on to Frongoch camp in Wales.

After his release he decided to study medicine and after a short introductory course in Skerries, Co. Dublin, he enrolled in medical studies at University College Galway. He resumed his revolutionary activities in 1919 and had to leave his studies as he was ‘on the run’ during the War of Independence. He sided and fought with the anti-treaty side in the Civil War of 1922-1923 and after being captured was held at Gormanstown, Co. Meath for about a year and a half. Upon his release he returned to his home county of Galway.

He made a number of attempts at politics and in 1936 he contested a seat for Galway in the local by-election held that year as a result of the death of Patrick Hogan. He was subsequently elected as a TD for Fianna Fail and defeated George Hogan and Count Plunkett on his way to electoral victory. He was appointed to the agricultural wages board committee by agricultural minister James Ryan but did not contest the seat again in the general election held the following year. By now he had decided that a medical life was not for him and he became a farmer in his home county. He also ran the local post office in Kilcolgan for several years.

History Ireland, ‘The Easter Rising in Ireland’ Volume 19 no.1.

Capuchin Annual 1966, ‘The Rising in Galway’ by Mattie Neilan