Seán MacEoin was born John Joseph McKeon on 30 September 1893 at Bunlahy, Granard, County Longford, the eldest son of Andrew McKeon and Catherine Treacy. After a national school education he trained as a blacksmith in his father’s forge and, on his father’s death in February 1913, he took over the running of the forge and the maintenance of the McKeon family. His national activities began in earnest in the same year when he joined the Clonbroney Company of the Irish Volunteers and was sworn into membership of the Irish Republican Brotherhood.

His initial contact with Michael Collins was at the Longford by-election in May 1917 and a very strong friendship developed between the two men. MacEoin’s War of Independence career was active and eventful. He served as Company Captain and later O/C 1 Battalion, Longford Brigade, 1917–20; Vice O/C and Director of Operations, Longford Brigade, 1920–21; as well as Provincial Centre for the IRB with a place on the Supreme Council. His exploits with the North Longford Flying Column are the stuff of legend, particularly the engagements with the enemy at Ballinalee in November 1920 and Clonfin in February 1921.

Arrested and badly wounded in March 1921, MacEoin was returned unopposed to the Second Dáil for Longford-Westmeath. He was court martialled and sentenced to death in June 1921 for the murder of RIC District Inspector T.J. McGrath and when, in August, imprisoned Deputies were being released to attend Dáil Éireann to ratify the Truce, an exception was made of MacEoin. Eventually released at Michael Collins’ insistence, MacEoin nominated Eamon de Valera for election as President by the Dáil.

During the Dáil debate on the Treaty, MacEoin seconded Arthur Griffith’s motion proposing acceptance. Appointed GOC Western Command in June 1922, he directed activity against anti-Treaty forces during the Civil War, particularly in the Mayo and Sligo areas. He had been re-elected as a TD in the same month as his appointment. He did not seek re-election in 1923. For the rest of the 1920s his military career was a steady upward curve, appointed GOC Curragh Training Camp in August 1925, Quartermaster General in March 1927, and Chief of Staff in February 1929. His tenure of the highest post in the armed forces would not appear to have been a particularly happy period and his departure came in June 1929, with the opportunity to stand as a Cumann Na nGaedheal candidate in a bye-election in Sligo-Leitrim which he won.

In the 1932 general election he moved to the constituency of Longford-Westmeath and served the Longford area as TD in either Longford-Westmeath (1932–37, 1948–65) or Athlone-Longford (1937–48) until he was defeated in the 1965 general election. During a long and distinguished political career he served as Minister for Justice (February 1948–March 1951) and Minister for Defence (March–June 1951) in the First Inter-Party Government; and again as Minister for Defence (June 1954–March 1957) in the Second Inter-Party Government. He stood twice as candidate for the Presidency, against Seán T. O’Kelly in 1945, and Eamon de Valera in 1959.

An expectation that he might be an agreed candidate for the office in 1959, as a result of his not standing against O’Kelly in 1952, was disappointed by de Valera’s decision to quit parliamentary life. MacEoin retired from public life after the 1965 general election and died on 7 July 1973. His wife Alice Cooney, who he married on 21 June 1922 at a ceremony attended by Griffith and Collins , died on 16 February 1985. They had no children. 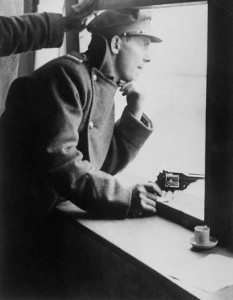 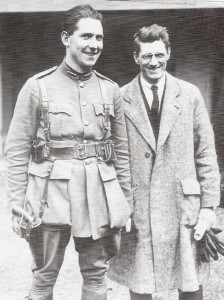 Great photo of Sean McKeon and Sean Moylan, taken during the peace pact. These two great men would go on to fight on opposite sides during the dreadful Civil War 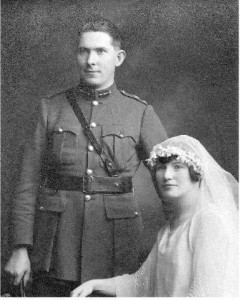 Sean McKeon on his wedding day