The Cork Council of Trade Union’s along with Cork City Council invites you to a free presentation on our ‘Forgotten Hero’ Tadgh Barry by Dr. Donal O’Drisceoil, School of History, UCC.

The Cork Council of Trade Unions along with SIPTU and the Lord Mayor of Cork would like to invite you to attend the commemoration of one of the Trade Unions great leaders of the 20th Century. Alderman Tadhg Barry.

Tadhg was a tremendous ambassador for worker and human rights, he was a follower of the ideals of James Connolly and a patriot. 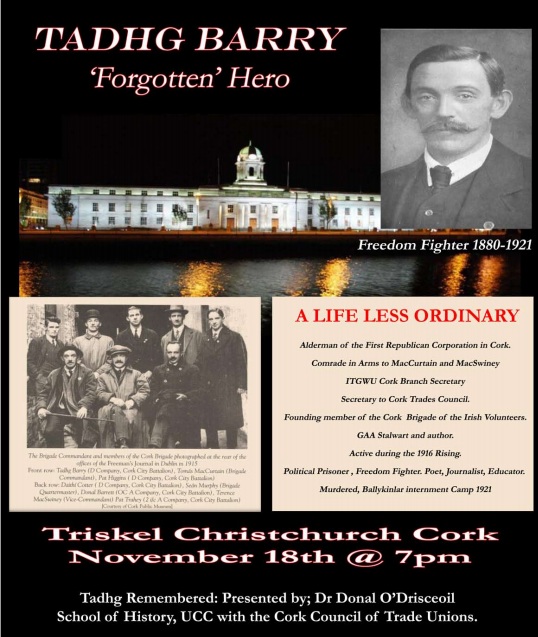 ‘Tadhg Barry Remembered’. Is the working name for an on-going campaign to commemorate one of Cork’s most highly regarded activists of 20th Century. Writes Trevor Quinn of SIPTU.

Tadhg, a native of Blarney Street was to have the ominous title as one of the last people killed by the British forces in the revolutionary years. Just some three weeks before the signing of the Anglo-Irish Treaty in 1921, he was shot through the heart on November 15th, by a British sentry at Ballykinlar internment camp Co. Down.

Born to a working class family in 1880, he was schooled at the Blarney Street National School and then the North Monastery. Later he went on to work for four years in Our Lady’s Asylum and around 1909 his interest in journalism was becoming recognised. He began to write for the newly-established Cork Accent and went onto become a staff writer on the Cork Free Press (1910-1916) as a direct competitor to the Redmonite Cork Examiner. Barry specialised in GAA affairs and wrote under the pen-name of ‘An Ciotog’.

This love of the game was born out of action, Tadhg was a delegate to both county and national GAA boards, he trained the first camogie team in Cork and (second in Ireland), Fainne an Lae he was a referee and Leading member of the Sunday’s Well club.These were not to be the only areas of service to his county for Tadhg, as he was to become radicalised. Tadhg was to commit to the idea of a free Ireland and the ideals of James Connolly, he would be a founding member of and secretary to the original Sinn Fein in Cork (1906-08) and prominent within the Cork Branch of the ITGWU. As a founding member of the Cork corps of the Irish Volunteers in 1913 he became an Officer and had previous experience from training of the Fianna in Cork from 1911, alongside Tomas MacCurtain and Sean O’Hegarty. Tadgh shared a platform with Connolly in Cork on two separate occasions and was on active service during the 1916 rising. Barry was selected Cork delegate to the historic October Sinn Fein convention in the Mansion House 1917.

During this period he kept up his writing and was a regular for his union paper the Voice of Labour on topics of workers’ rights and the way forward for society. In 1916 he had the first descriptive book on hurling published entitled ‘Hurling and how to play it’. Barry also wrote poetry and had several collections published including Songs and(c)rhymes of a gaolbird published shortly after his release from prison in 1917 for delivering a seditious speech, he was released early after a hunger strike.By early 1918 he had a weekly column with the Southern Star.

A Butterfly in the Gaol  (extract)
My heart will flutter like your wings
Unceasing ‘gainst the bars’
That kills the joy that summer brings
And on my spirit jars;
For tyrant laws have buried me
Away from home and friends,
But still pride that is for thee
Dear Erin, makes amends.

In May 1918 he was arrested again by British forces in the ‘German Plot’ and was one of the senior Republicans arrested across Ireland and the only Republican lifted in Cork. Upon his release in 1919 he became full time Branch Secretary to the ITGWU Cork and was to the fore in the farm labourer’s widespread actions for a decent living wage between 1919-1920 and also the Dock’s strike of 1920.

Elected Alderman in the 1920 municipal elections which achieved the first Republican Corporation of Cork, he won on a joint ITGWU/Sinn Fein ticket representing the Sunday’s Well and Blarney Street areas. He now sat in a position to represent the interests of the workers and citizens of Cork along-side his comrades the Lord Mayor Tomas MacCurtain and Terence MacSwiney. In this arena Barry and his allies pushed through many achievements for the workers and citizens of Cork.

But this was not to last. 1920 brought new British tactics and the Axillaries (Black and Tans) were set loose on Cork City. Through this terror tactic the British may have hoped to extinguish the flames of ‘Freedom’ growing in Cork. The targeting of buildings ‘representing’ new ideals such as a free Ireland and burning them to the ground was the preferred method to leave a lasting statement. Both the now ‘Republican’ City Hall and the ITGWU Offices on Camden Quay were targeted and gutted.

Also we can see from a rare surviving ITGWU document, the minute book of 1920 that the people of Cork were well aware of the revolution they lived in and we read the comment “war chest” referred to on several dates, This may well be a sign of the times for worker’s facing industrial action and a city under siege.

1920 brought the cowardly murder of the Lord Mayor of Cork Tomas MacCurtain in the family home and the death of Terence MacSwiney on hunger strike in Brixton jail on October 24th.

Following the loss of MacCurtain and MacSwiney, the Corporation gathered at the Court House to elect a new Lord Mayor. Barry and eight other councillors were arrested. He was transported to Ballykinlar internment camp in Co.Down. Here he was in the company of 2000 other freedom fighters including Sean Lemass.

Tadhg whilst incarcerated kept busy and spent much time teaching fellow detainees Irish. He was noted for flying the ‘red flag’ over his barracks to the great annoyance of the British. On November 15th 1921 whilst saying farewell to comrades leaving the camp Tadhg was slow to walk back and was shot through the heart by a sentry.

Tadhg’s funeral was the largest ever seen in Cork and on route over 30,000 marched behind his coffin in Dublin, almost all public bodies in Ireland passed a resolution of sympathy. Cork was closed, the cortege was led by the Cork IRA with bishops, priests, TD’s, Lord Mayors and representatives from many other cities in attendance.

Michael Collins was in attendance even though he was the chief negotiator for the Irish delegation in the peace talks taking place in London.This incredible mark of respect leads you to understand the importance of Cork’s Tadhg Barry in the political and military struggles in Ireland at the time.

Now his memory and contribution to both Cork and Ireland have all been but forgotten.

This year marks the 90th anniversary of the untimely death of one of Corks most prominent and sadly forgotten citizens.Tadgh a figure of Leadership and Authority was a great loss to Cork and leaves you thinking of what Ireland could have been with men such as he today!.

The Cork Council of Trade Union’s along with Cork City Council invites you to a free presentation on our ‘Forgotten Hero’ Tadgh Barry by Dr. Donal O’Drisceoil, School of History, UCC.


This presentation will cover areas of his life from worker rep for the ITGWU to Branch Secretary, from GAA Player to County and National delegate, from idealist to founder of Sinn Fein in Cork and Leader of the Irish Volunteer’s.

But sadly is in the main forgotten.