The occupation of Moore Street 2016

The occupation of Moore Street 2016

The IVCO Irish Volunteers Commemorative Organisation flag atop the Moore Street buildings, many organisations, societies, political parties and none are in support of the occcupiers. The people of Ireland do not want the destruction of this site which is the “last battleground of the 1916 Rising. For those of the GPO Garrison their last place of military action was at Moore Street and Henry Place. The last headquarters of the Provisional Government of the Republic was in Moore Street. Each of the sixteen houses in the terrace of houses from no. 10 to 25 Moore had a major significance to the Volunteers. It’s only idiots like revisionists think that only four houses (nos. 14 to 17) have any significance at all.” (Pat Collender)


Sinn Fein and numerous groups, societies,organisations and many individual politicians have supported the full preservation of the buildings from the beginning.

They have been consistently and deliberately ignored.

The developer and the present Government wish to destroy our heritage. The people have other ideas and do not want this destruction of our national monument. We urge all people who are proud of our history to go and support the occupiers at Moore Street and help them in any way they can. The men and women of 1916 deserve no less. 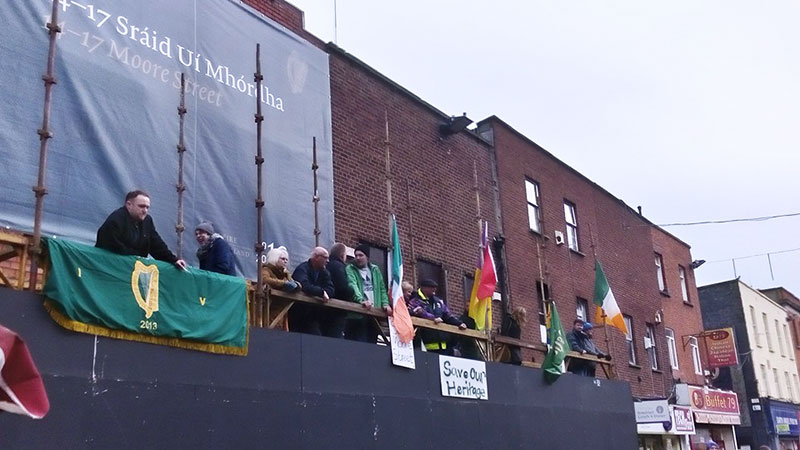