An Article by member Brian O’Donchu: 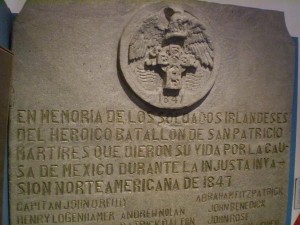 During the Mexican-American War (1846- 1848), approx. half of the American Army were Irish Emigrants.

They were treated very badly, much worse than usual recruits —-because of attitudes then to being Catholic (U.S was predominantly Protestant then, and in fact many Irish had been transported as ‘Indentured Servants’ or Bonded Labourers to Northern America and Carribean Islands in the 17th century (figures vary but anywhere between 60,000 and 100,000).This was worse than slavery (you had a slave for life, so treated him/her better), whereas a Bonded person was for 7 years, sometimes 10 yrs …. so they were worked to death in awful conditions (many times the White Irish slaves and Black slaves allied to have rebellions)……………..so, an Anti Irish/anti-Catholic attitude developed in America from that time …….it was ethnic cleansing in Ireland, and racism in America.
When later Irish emigrants arrived (even to Independent America after 1776) this attitude continued, especially after the Great Famine, when over a million Irish arrived between 1845 and 1852………………and continued …..until about 1920’s when my grandfather’s generation arrived it was much better…and so on…

During that war , which was over U.S. trying to steal Texas (and earlier Arizona , and California) from Mexico , the Irish Brigades were put on the front line , and often treated very badly with food, conditions ….and as i said …especially attitudes toward them…………..so….the Irish Brigades got sick of this , also (coming from a country where injustice was rife-Ireland, they felt empathy for Mexico…………….so……………in 1846/47 the Irish Brigades –en masse ,,,,,,went over tho the Mexican Army, under their charismatic leader Major John O’Reilly !! (John Riley some people then spelt it) .

The Mexicans were delighted. With the help of the Irish they won many battles against the Americans …..but, an Irish traitor betrayed them , led them all into a trap and they were captured by the Americans , and every single one of them were executed ……………many were publicly whipped to death (flogged).

However they became heroes in Mexico, and were never forgotten. In 1959 a war memorial in Mexico City was erected to them., with 71 of their names honoured.
Two books were written about them, one is–‘Batallón de San Patricio by Patricia Bustamante Cox(with a beautiful image inside the front cover , of a Mexican woman carrying a dead (red haired) Irish soldier in her arms.

The other book, more recent, is The Rogues March, by Peter F. Stevens.

Many years later, during the Mexican Revolution, around 1913, an band of Irish also helped the revolutionaries.

Recently also the Mexican Government honoured an Irish musician-, 6 time Grammy winner-Paddy Moloney(founder of The Chieftains) , for his musical collaboration with Ry Cooder,—SAN PATRICIO, which was inspired by the 1846-48 events.
The award -the prestigious Ohtli Award (translates from the Aztec language, Natuatl, as …PATH) was given in the Mexican Embassy in Dublin , last week.
Only 250 people have ever received it .

Now the Irish Filmaker-Neil Jordan , is intending to make a movie about that famous St. Patrick’s Brigade!