Update on the Save Moore street Campaign

Home/Commemorative Events, Uncategorized/Update on the Save Moore street Campaign
Previous Next

Update on the Save Moore street Campaign

The news that the Paris Bakery in Moore Street is to be forcibly closed is the latest twist in the bizarre planning history of the Carlton Site.
At a time when most small business’s are going to the wall the most successful business in the heart of historic Dublin is to be closed with devastating consequences for its management and seventy employees. The Paris Bakery building is also linked to the 1916 Rising located as it is in the terrace of houses secured and defended as the last stand of the 1916 Provisional Government of the Irish Republic. Five signatories to the Proclamation spent their final hours of freedom in this terrace.
That its proposed demolition will be financed by NAMA through public funding to make way for a ‘Celtic Tiger’ shopping Mall is a National scandal.
This is not planning in the public interest? This is planning in the commercial interest of a private property developer through public funding.
The Save 16 Moore Street Committee will continue the campaign to save Moore Street from obliteration under the NAMA backed Chartered Land planning application.

Letter in Mail regarding the O Reilly ,Conway, price article

Your report that at long last the State through Nama funding is to take action to preserve and restore the 1916 National Monument is, of course, welcome news (7th February). Under the ownership of Chartered Land it had become derelict and endangered.

Questions arise, however, on this proposed funding that need to be answered in the public interest.

Who is to be the recipient of the public monies now being set aside for restoration? If this represents a payment to Chartered Land then the State is effectively rewarding the owners of the National Monument for their failure to maintain and preserve its protected structures contrary to the planning regulations.

Is this public money being set aside for a restoration of the buildings by the State per se or in support of Chartered Lands planning application to obliterate the surrounding area that includes other buildings directly linked to the 1916 Rising. This would be contrary to the recommendations of the National Museum and the Dublin City Council Moore Street Advisory Committee?

Why was this announcement made before the Minister receives the revised Chartered Land consent application for the proposed work to the National Monument and before the planning authority considers what are major revisions to the original planning application to demolish and build on the very Monument itself?

What will this proposed restoration of the Monument cost? Does its present derelict condition and the fact that the buildings lay abandoned and neglected since they were closed for use in 2008 a bearing on this?

A conservation plan should not blind us to the important questions that this announcement poses. Until they are addressed and answered satisfactorily the campaign to protect and preserve what the National Museum describes as ‘the most historic site in modern Irish history ‘ will continue.

The Concerned Relatives of the Signatories to the 1916 Proclamation

Some background to the Save Moore Street Campaign:

Disgraceful….Nama are going to pay a bankrupt Developer Joe O reilly to Destroy the last surviving battlefield site of the 1916 rising ,which could be turned into the most fantastic and educational area , .in the process they are going to close down a bakery which currently employes 70 people ….To build a supermarket ……small business is the way foreword , or does money talk louder than politicians mantras .. 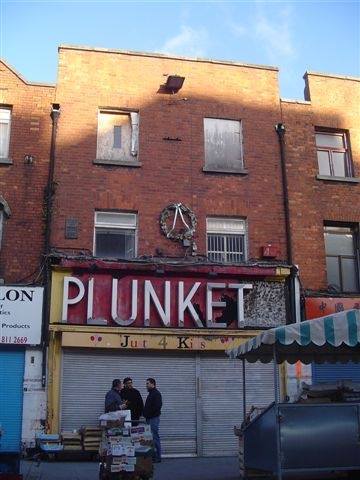 From the National Graves Association:

The National Graves Association are the founders of the Save 16 Moore Street Campaign
In the Irish Independent 7th February Mr. John Conway claims to have been’struggling for years’ to save the Moore Street area. This is news to campaigners who continue the campaign to prevent this historic area from being obliterated under the Chartered Land planning application.

Mr Conway has been a consistent supporter of that application from its’ park in the sky’ proposal through the planning process including the Bord Pleanala hearing to his active support for the proposed Chartered Land Commemoration Centre at 14 to 17 Moore Street. Far from struggling to save this area the record shows that he has been a leading supporter of the developer’s plan to destroy it. The campaign continues to save the area from the wrecking ball by those who never wavered in its defence and who remained true to the founding aims of the Save 16 Moore Street Committee.

Joe.O’Reilly pointed out that if the “Save 16” Group decided to take up the offer that they would then be supporting the proposed Development. Joe.O’Reilly did have one concern that if the “Save 16” Group did not object to the development but other people might come along, claiming some “Save 16”/ 1916 agenda and object anyway because there are people who would try and jump on the bandwagon. John.Conway confirmed if they accept the offer and support the Development that “Save 16” will denounce any opportunists or people pretending to be part of the Committee.

Please help save 18-19 Moore Street and our wonderful Paris Bakery by completing the short form. We will present all the names we collect as a petition to Minister Jimmy Deenihan and the management of NAMA when we meet them to discuss our case.