Capt Cornelius Murphy of Millstreet Battalion, Cork No. 2 Brigade is executed in Cork – the first official execution under martial law.  (He was arrested on 4th January and charged with possession of a loaded revolver.)  Patrick Lynch KC had applied for habeas corpus.

Two brothers and a sister, dad is a wool dyer

Six IRA prisoners are shot in Cork.  In retaliation, the IRA shoots twelve unarmed British soldiers in the streets of Cork the following day. Sean Allan was from Bank Place, Tipperary and a member of the Tipperary No. 3 Brigade and the others were captured after the Dripsey ambush.

Mallow Battalion Column, under Jack Cunningham (with the battalion Commandant, Tadg Byrne, also present) lay in ambush on the Mallow-Cork road at Mourne Abbey but are surrounded by a strong British force.  Three Volunteers were killed (Patrick Flynn, Patrick Dorgan and Eamonn Creedon) and another dies of his wounds (Michael Looney).  Eight Volunteers are taken prisoner and two of them are subsequently executed on the 28th April after a court-martial (Patrick Ronayne and Thomas Mulcahy).

In February 1921 Moore was one of a flying column of over 20 IRA men billeted in an old farmhouse at Clonmult, near Midleton under Commandant Diarmuid Hurley. They were tracked down and surrounded by a company of the Hampshire Regiment of the British Army and RIC, Black and Tans and Auxiliaries. In the ensuing gunfight 12 of the republicans were killed and eight captured, including Maurice Moore.

The group were given a military courtmartial and all were sentenced to death. Seven of them later had their sentences commuted but two, Moore and his lifelong friend Paddy O’Sullivan were executed on 28 April 1921.

Fought at Clonmult, was captured.

Knockardbane ,Liscarroll and member of Charleville Battalion, Cork No. 2 Brigade is executed in Cork.  He had been captured on the 11th May at Aughvrin, near Liscarrol.

Mother had passed. Brother and sister, son of farmer.

During the period of the killing of these Volunteers General Strickland, the British G.O.C. of the Martial Law area received written warnings from the I.R.A. that if executions went ahead there would be retaliatory acts, as such,  retaliatory attacks for Volunteers including Frank Hurley, Geoffrey Canty and Lt. Con Murphy did not occur as a plan had already been put in place in retaliation for the 28/4 killings.

Different esitimates of numbers  can be found in Tom Barry pg 547.

Major Compton-Smith, of the Royal Welsh Fusiliers, who was being held hostage by the IRA was shot by the IRA on the same day.  The IRA had told Major General Strickland, Commander of the British 6th Division, that Compton-Smith would be shot if the IRA men were executed 28/4.

I’m not entirely certain as to the exact reason why, as he isn’t buried there, Fian but Richard Noonan is also commemorated on the monument. I have little information on him available to hand but can ask a collegaue of mine if you’d like it.

And while on the subject of Cork Fian, in case it is of any interest: There were four Fian from Cork killed during that period, they were:

Below is a mural that was completed to mark the centenary of Na Fiann Éireann by members of Ógra Shinn Féin in the Lee Fields (a popular walking area near UCC) on an abandoned structure (formerly the city baths I think). It was painted over by the City Council within a few weeks who failed to paint the rest of the graffiti riden wall. 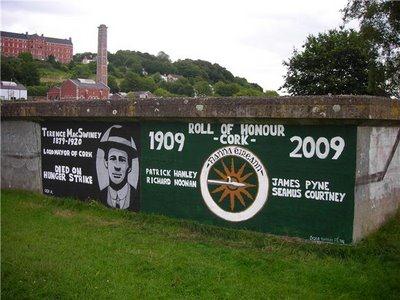 Seán Ó Caomhánaigh: (Though I believe this would fall outside of the remit of the years your society commemorates)

Shot by Free State Branch men while unarmed, digging an escape tunnel into the gaol
Plaque in Memory of Vol. John Joe Cavaghnagh on the other side of the gates of the old Gaol Gates from the Roll of Honour. Killed in 1940. 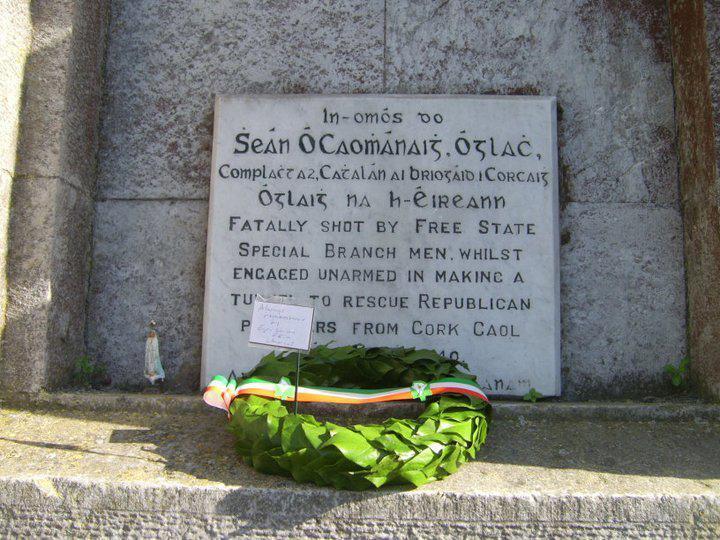 The Full complete article can be seen at  https://irishvolunteers.org/2011/05/cork-county-gaol-ira-volunteers-executed-memorial/ 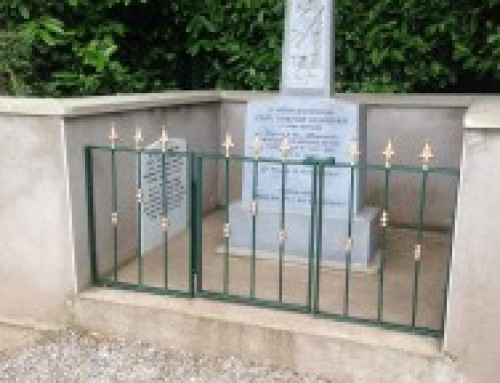 The grave of the Commander in chief of IRA Kilcrumper cemetery,Co Cork.