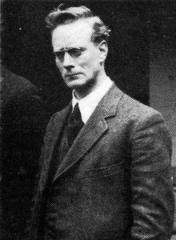 Mellows was born in Manchester, England to William Joseph Mellows, a British Army non-commissioned officer, and Sarah Jordan, of Inch, County Wexford, where he grew up. His family moved to Fairview, Dublin in February 1895 when Sergeant Mellows was transferred there; however, Liam remained in Wexford with his grandfather Patrick Jordan due to ill health. He attended the military school in Wellington Barracks in Cork and the Portobello garrison school in Dublin, but ultimately refused a military career much to his father’s disappointment, instead working as a clerk in several Dublin firms.

A nationalist from an early age, Mellows approached Thomas Clarke, who recruited him to Fianna Éireann, an organisation of young republicans. 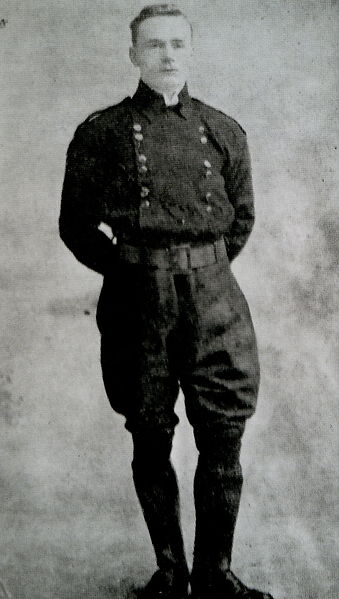 Mellows was introduced to socialism when he met James Connolly at Countess Markiewicz’s residence, recuperating after his hunger strike. Connolly was deeply impressed and told his daughter Nora ‘I have found a real man’.

He was active in the IRB and was a founder member of the Irish Volunteers, being brought onto its Organising Committee to strengthen the Fianna representation. He was arrested and jailed on several occasions under the Defence of the Realm Act. Eventually escaping from Reading Jail he returned to Ireland to command the “Western Division” (forces operating in the West of Ireland) of the IRA during the Easter Rising of 1916.

He led roughly 700 Volunteers in abortive attacks on Royal Irish Constabulary stations at Oranmore, and Clarinbridge in county Galway and took over the town of Athenry. However, his men were very badly armed and supplied and they dispersed after a week, when British troops and the cruiser Gloucester were sent west to attack them.

After this insurrection failed, Mellows escaped to the USA, where he was arrested and detained without trial in the “Tombs” prison, New York, on a charge of attempting to aid the German side in the First World War. This was in the context of incidents like the Black Tom and Kingsland explosions where German agents had bombed neutral American ports and industrial facilities.After his release in 1918, he worked with John Devoy and helped to organise Éamon de Valera’s fund raising visit to America in 1919–1920.

He returned to Ireland to become Irish Republican Army “Director of Supplies” during the Irish War of Independence, responsible for buying arms. At the 1918 general election of December, he was elected to the First Dáil as a Sinn Féin candidate for both Galway East and for North Meath. (According to United Kingdom law, these were Westminster constituencies but Sinn Féin did not recognise them as such, but rather took them as de facto Dáil Éireann constituencies).Opponent of the Treaty
He considered the Anglo-Irish Treaty as signed to be a betrayal of the Irish Republic, saying, in the Treaty Debates of 1921–22:“ We do not seek to make this country a materially great country at the expense of its honour in any way whatsoever. We would rather have this country poor and indigent, we would rather have the people of Ireland eking out a poor existence on the soil; as long as they possessed their souls, their minds, and their honour. This fight has been for something more than the fleshpots of Empire. ”A conference of 9 TDs was deputed to meet privately on 5 January 1922 to resolve the dispute and to achieve a unified front by compromise. The four other anti-Treaty TDs said there was agreement but Mellows did not, and was seen thereafter by pro-Treaty TDs as one of their most implacable opponents. The following day the Dáil voted to approve the Treaty by a majority of 64 to 57. Details on the private conference and the private Dáil session debate were not made public until the 1970s.He wrote a social programme based on the Dáil’s Democratic Programme of 1919 aimed at winning popular support for the anti-Treaty cause.

Mellows was one of the more strident TDs on the approach to the Irish Civil War. On 28 April 1922 he told the Dáil:

“There would no question of civil war here now were it not for the undermining of the Republic. The Republic has been deserted by those who state they still intend to work for a Republic. The Volunteers can have very little faith at this moment in the Government that assembles here, because all they can see in it is a chameleon Government. One moment, when they look at it, it is the green, white and orange of the Republic, and at another moment, when they look at it, it is the red, white and blue of the British Empire. We in the Army, who have taken this step, have been termed “mutineers,” “irregulars,” and so forth. We are not mutineers, because we have remained loyal to our trust. We are not mutineers except against the British Government in this country. We may be “irregular” in the sense that funds are not forthcoming to maintain us, but we were always like that and it is no disgrace to be called “irregulars” in that sense. We are not wild people.”

In June 1922, he and fellow republicans Rory O’Connor, Joe McKelvey and Richard Barrett (among others), entered the Four Courts, which had been occupied by anti-Treaty forces since April. However, they were bombarded by pro-Treaty Free State forces and surrendered after two days. Mellows had a chance to escape along with Ernie O’Malley, but did not take it. Imprisoned in Mountjoy Gaol, Mellows, O’Connor, McKelvey and Barrett were executed by firing squad on 8 December 1922, in reprisal for the shooting of TD Seán Hales.

Mellows is commemorated by statues in Oranmore and Eyre Square in Galway, in the official name of the Irish Defence Forces army barracks at Renmore (Dún Úi Maoilíosa) and in the naming of Mellows Bridge in Dublin. He is also commemorated in the names of two hurling clubs (one in Galway, and one in Wexford), and by Unidare RFC in Ballymun and their “Liam Mellows Perpetual Cup”.Mellows is buried in Castletown cemetery, County Wexford, a few miles from Arklow. An annual commemoration ceremony is held at his grave site, in which a wreath is laid by a member of the Liam Mellows Commemoration committee. “Mellows Avenue” in Arklow is named in his honour. 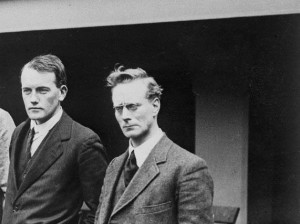 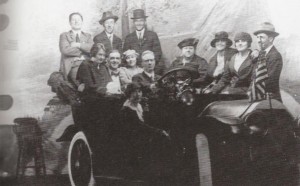 Here is a rare one guys, Harry Boland centre back and Liam Mellows at the wheel. 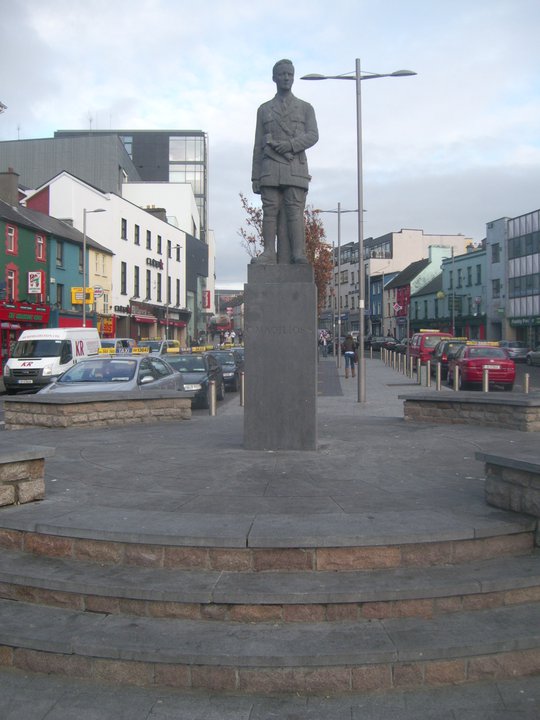