Ninety-four years ago this week – Capture and execution of I.R.A. Volunteers

Ninety-four years ago this week – Capture and execution of I.R.A. Volunteers

Ninety-four years ago this week – Capture and execution of I.R.A. Volunteers.


On the morning of January 28, 1921, in an area known as Godfrey’s Cross, located about 20km. west of Cork city and roughly half way between the villages of Coachford and Dripsey, an IRA ambush party of men from the 6th Battalion Cork No. 1 Brigade lay in wait for a convoy of British troops that regularly used this road when travelling between Ballincollig Barracks and Macroom.

News that the IRA was preparing for action soon became common knowledge amongst the local population. One resident of the area, who lived just outside the village of Coachford at Leemont House, was Mrs Mary Lindsay, a woman with strong Loyalist convictions. Upon hearing of the IRA’s preparations, she travelled to the military barracks at Ballincollig and informed the British authorities of what she knew. (Mrs Lindsay and her servant James Clarke were later executed by the IRA as a result).

The barracks in Ballincollig was occupied by troops from the 1st Battalion of the Manchester Regiment. Their commanding officer, Colonel Dowling, decided to launch an attack against the IRA. At around 3.30p.m. a column of British troops under the command of Lieutenant-Colonel Garret Evans left the barracks for Dripsey village. At Dripsey the troops dismounted from their lorries, divided into five groups and set out to surround the ambush party. The IRA had scouts posted and one of these saw the approaching troops and alerted his comrades. The officer in charge of the ambush ordered a withdrawal, but firing soon broke out. Eight members of the IRA (five of whom were wounded) and two civilians were captured and brought to Ballincollig barracks. Two of the more seriously wounded IRA men were subsequently moved to the military hospital in Victoria Barracks. The others were later transferred to the military detention barracks in Cork where they awaited trial by military court.

On 8th. February the trial of eight of the ten men captured at Dripsey opened in the gymnasium of the military detention barracks (two others – Captain James Barrett and Volunteer Denis Murphy – were still being detained in the military hospital). The defendants were; Volunteers Thomas O’Brien, Patrick O’Mahoney, Timothy McCarthy, John Lyons, Jeremiah O’Callaghan and Daniel O’Callaghan, Eugene Langtry (civilian) and Denis Sheehan (civilian).

The military court consisted of a colonel and two majors of the British army. When the trial opened, the accused pleaded not guilty to the charges. The proceedings lasted two days. Volunteer Jeremiah O’Callaghan together with Eugene Langtry and Denis Sheehan, both of whom had no connection with the IRA, were found not guilty and released. The remaining defendants were found guilty and sentenced to death.

Of the two men still detained in the military hospital, Captain James Barrett died while still a prisoner on 22 March 1922. Volunteer Denis Murphy stood trial in Victoria Barracks on 9 March. He was found guilty and sentenced to death, but this sentence was later commuted to one of 25 years’ imprisonment.

Early on the morning of 28 February, a large crowd gathered outside the gates of the military detention barracks where the widow of Tomas MacCurtain had erected an altar to pray for those who were about to die. At eight o’clock a volley of shots rang out from inside the barrack walls. As the crowds outside the barracks slowly began to disperse more firing was heard at eight fifteen and at half-past eight. Rather than execute the men all at once, the military authorities had decided to execute them at intervals of fifteen minutes.

On the night of the executions the IRA launched a number of attacks against British forces at different locations throughout Cork city, which resulted in six British soldiers being killed and four being wounded.

* Picture shows the road between Dripsey and Coachford where IRA volunteers had lain in wait to ambush a convoy of British troops based at Ballincollig barracks. 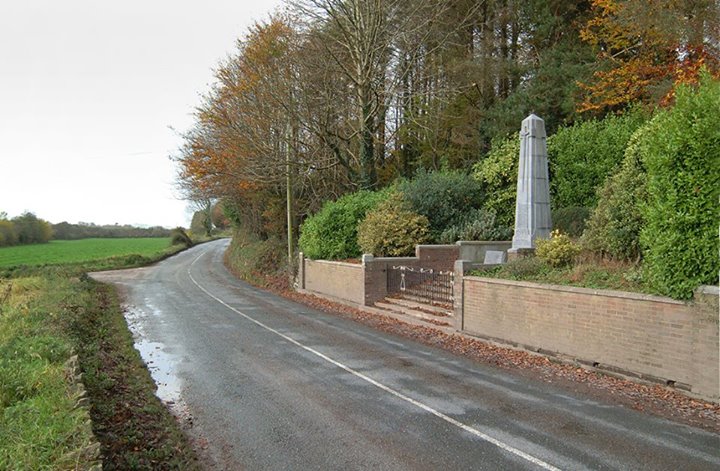