Home/Commemorative Events, Uncategorized/Report of the Irish Ceremony at Bannockburn on the 700th Anniversary of the Battle
Previous Next

In brilliant sunshine on 21 June a crowd of around a hundred Irish and Scots attended an Irish ceremony to mark the 700th anniversary of the Battle of Bannockburn, when over the two days of 23 and 24 June 1314, under the leadership of King Robert the Bruce; the victorious Scots and their Irish allies inflicted a heavy defeat on a numerically superior English army led by King Edward II in the first War of Scottish Independence. 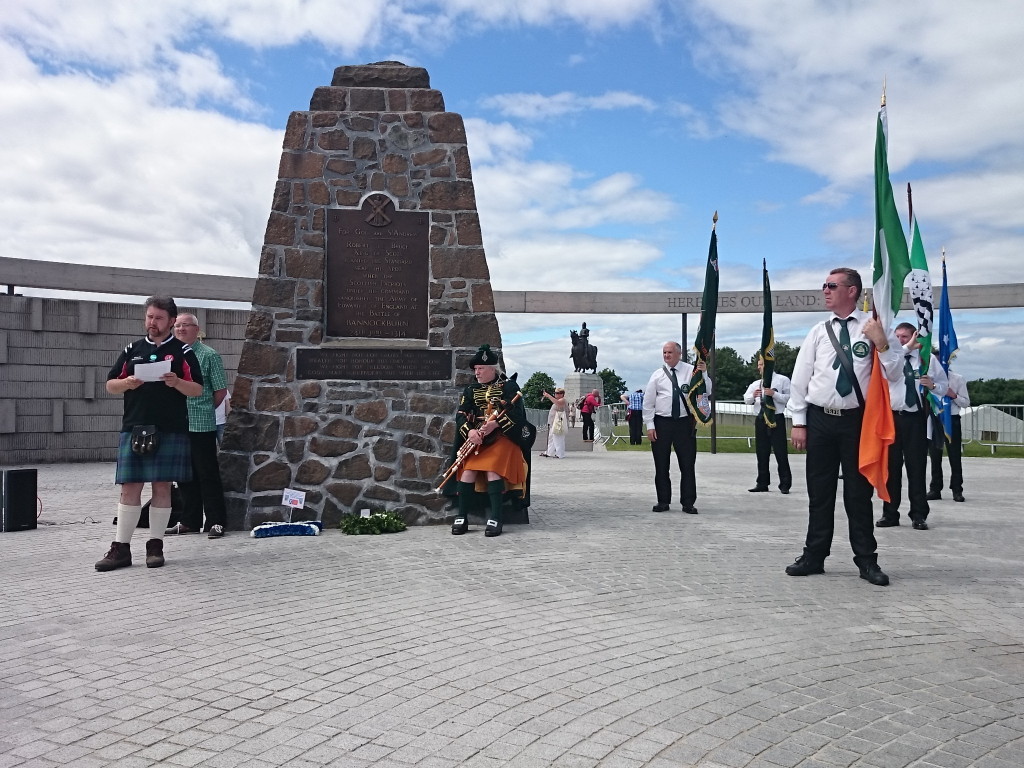 The ceremony which was held in the Rotunda on the historic battle site was organised by members of the Irish community in Scotland with the endorsement of Irish for Yes and the Alba Branch of the Celtic League.

The historian Stephen Coyle who chaired the proceedings, explained that the purpose of the ceremony was two-fold; an act of remembrance for the Scots and Irish forces killed in the battle, and to highlight the historic ties that exist between the peoples of Scotland and Ireland and which can only grow stronger in an independent Scotland. He then introduced the first speaker Dr Máirtín Ó Catháin, Lecturer in Irish and European History at the Central University of Lancashire. In a very informative address Dr Ó Catháin explained the Irish dimension to the battle including the involvement of the armies of the O’Neills and O’Cathains in what was a magnificent display of Celtic solidarity in the struggle for freedom against the common English foe. In his concluding remarks Dr O’Cathain stated: “Ireland looked to Scotland in 1314 and it looks to it again in 2014. This time there’s no need to send a Bruce but if you send a message – that the writing is on the wall for the so-called Union, you’ll be doing a work not only for Scotland but for Ireland as well. And that is truly the best way to honour those who fought and died for Gaeldom and freedom”.

The next speaker was Caoimhín Ó Cadhla who is a Dublin based member of the Irish Branch of the Celtic League. Mr Ó Cadhla in his opening remarks stated: “We Irish look to your independence campaign with hope as we did 700 years ago. Realise that you are not just fighting for freedom for Scotland but for all the countries that seek their freedom around the world including the other Celtic Nations. This is not just a national issue but an international issue; that being the conflict between self-determination and the forces of imperialism”. 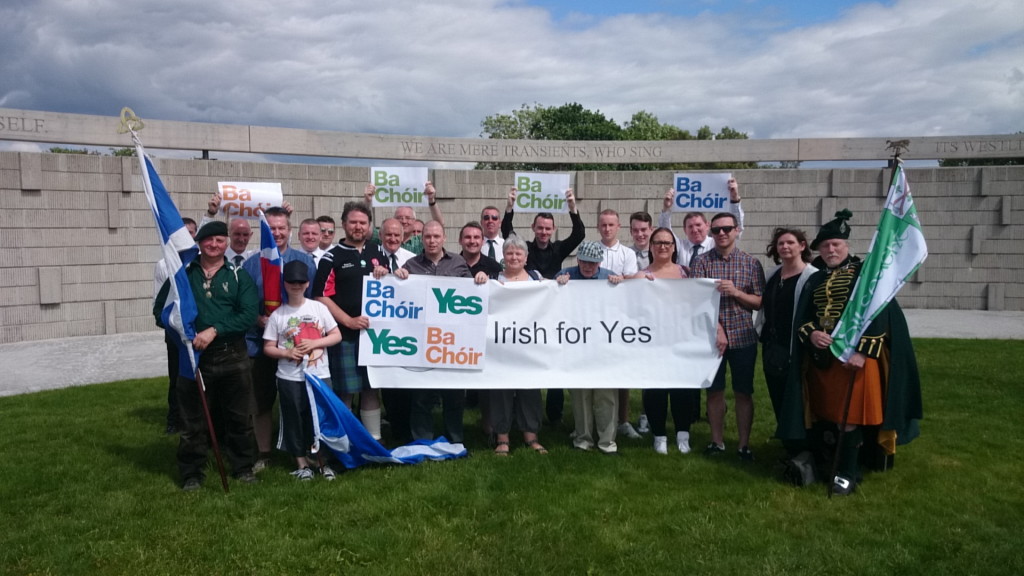 Irish for Yes at Bannockburn

The final speaker was Feargal Dalton who is a Glasgow based Scottish National Party councillor. He first visited Scotland in 1994 to do some mountain climbing in the Highlands.  He stated: “I had learned a bit of Scottish Gàidhlig at school.  But I was struck by the place names on the map and how similar they were to the Irish language.  It was only then I realised how strong the cultural links are between Scotland and Ireland. We stopped in Glasgow on the way home and I was struck by the raw urban friendliness of Glaswegians; they reminded me of my fellow Dublin northsiders. I set about making Glasgow and Scotland my home which they became in 1996 and in the first Holyrood election of 1999 I voted for the SNP.  I bumped into a good friend on the way back from polling station, a friend who is a Scot but with a strong Irish identity. I told him that I had just done my bit in the election by voting for the SNP.  He said, “Oh no, we Irish in Scotland don’t want Independence.  We’d end up like the ones in Belfast.” I was taken aback. This was my first encounter with Unionism in the Irish Community in Scotland.  And it was a Unionism based on fear and fear alone”.

A hundred years ago there were unionists who said, “don’t devolve anything to the Irish.  Give them an inch and they’ll take a mile.” Other unionists believed some powers needed to be devolved in order to kill nationalism by kindness. Sounds very like, “Devolution will kill nationalism stone dead”. The words in 1995 of our own George Robertson, Scotland’s foremost Unionist.

Earlier this month we had the commemorations for the fallen in Normandy.  Commemorations that were attended by the nations of the allies and Germany.  The British and Irish Governments are working out the detail of how they will commemorate the fallen of 1916 in two years’ time.

But John Major says that by commemorating the fallen at Bannockburn we are anti-English.

I can assure you Mr Major that I am only anti people who blame the failings of an indigenous elite on the poor, the sick and on immigrants. I would never denigrate your history or the memory of your fallen Mr Major, so I respectfully ask that you don’t denigrate ours.

The polls are showing that the gap between Yes and No has narrowed. We are finding on the doorstep in Glasgow that there is no gap. This is causing increasing panic at Westminster.

But here we are in Scotland in 2014. And at this defining time in our lives, in this defining moment in our country’s history, I say to those in the Irish community and the wider community; if you believe in the full self-determination of Celtic nations, all you have to do is simply put an X in a box next to Yes”.

The chairperson then read out a message of support from Dan O’Neill who is Chief Guardian of the Ancient Clan O’Neill of Tyrone, in which he expressed the importance of Celtic solidarity in our common struggles which would be best affirmed by casting a Yes vote on 18 September.

Eugene McCabe who is a Glasgow based Yes Scotland campaign activist, laid a wreath at the memorial cairn on behalf of the Irish in Scotland. The chairperson concluded the ceremony by asking those assembled to observe a minute’s silence while the uilleann piper, Uilliam ÓhAicéad, played a lament in memory of the fallen. The colour party simultaneously dipped its flags as a mark of respect. 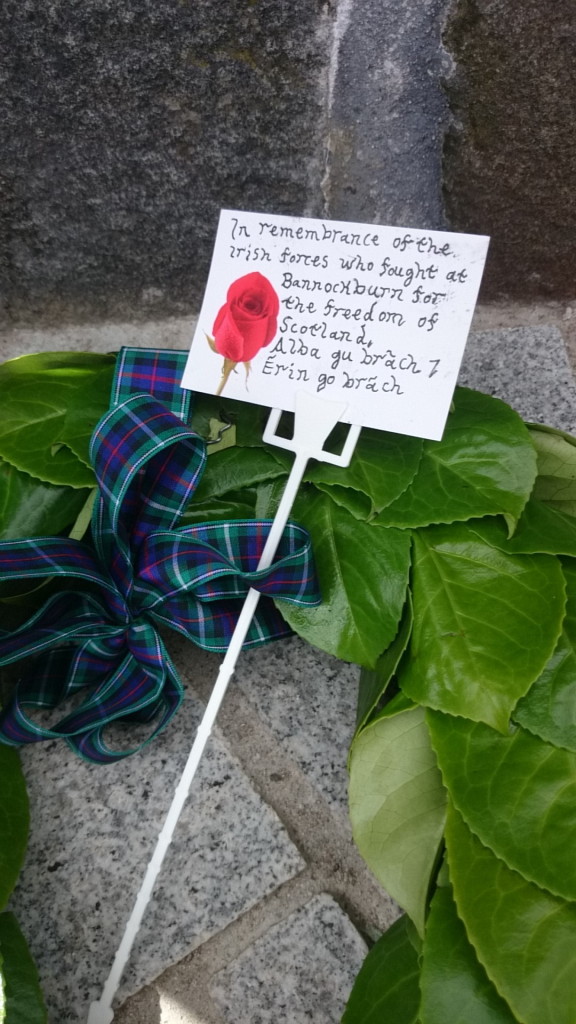 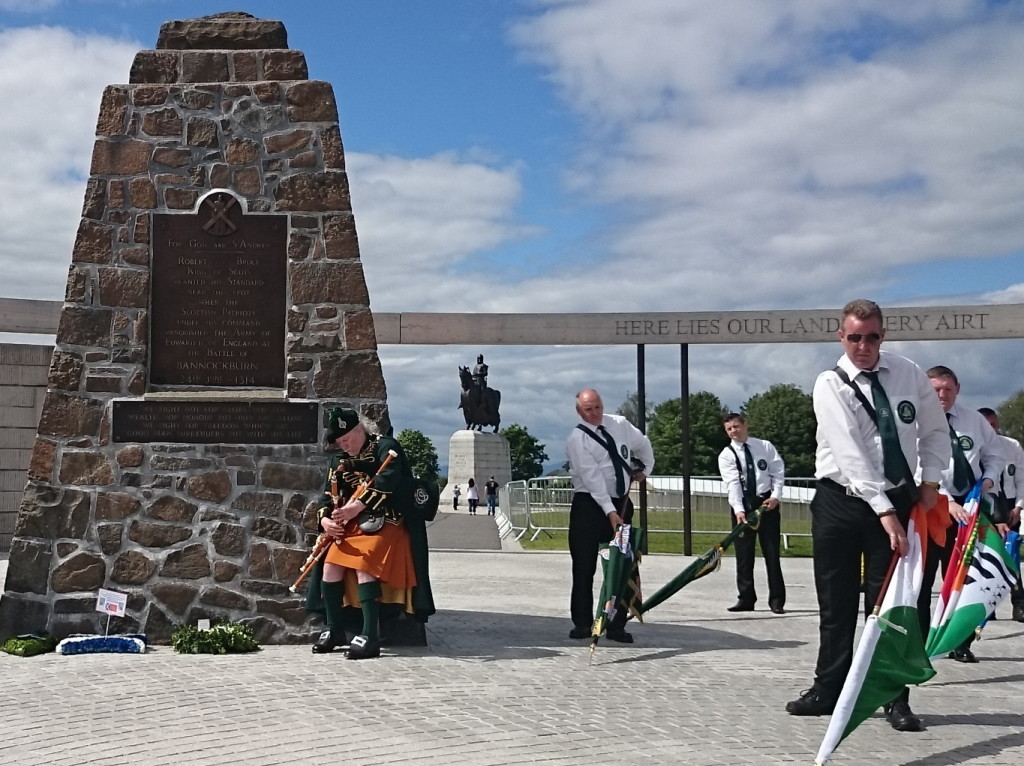